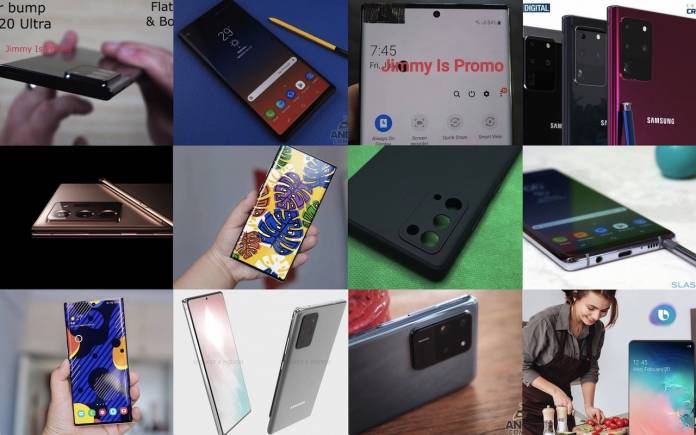 The Samsung Galaxy Note series is still alive. There have been talks that the South Korean tech giant could be integrating the Galaxy S and Galaxy Note but with the release of the Galaxy S20 and all the information already shared about the next-gen Galaxy Note 20 in the past few months, we know the two are here to stay as separate collections. The Galaxy S20 phones are Samsung’s premium flagship offering for the first half of 2020. That period may not be considered the best by everyone (no thanks to the coronavirus) but there is no stopping Samsung from moving forward.

One of the earliest information we gathered about the Galaxy Note 20 line was that the phone was in the works back in March. It was said to come with 5G and 128GB base memory. A gallery of renders and specs were made public as well, showing off the future Samsung Galaxy Note 20 5G phone.

Another set followed a couple of weeks later, showing a Galaxy Note 20 in a different color.

The following month, the Samsung Galaxy Note 20 was mentioned to run on a 4000mAh battery. A possible new design was leaked and we learned then there could be three variants. The Note series could ditch the ToF (Time of Flight) sensor.

With 5G slowly becoming a standard in Samsung premium phones, we got curious if a standard 4G model would still be introduced. The company is still expected to release a 4G model especially in key markets that don’t have 5G networks yet.

Samsung will release the Galaxy Note 20 and Galaxy Fold 2 right on schedule. That is something we’ve been hearing the past few weeks and yes, there won’t be any delay. The next Galaxy Unpacked event is going to happen on August 5. You see, Samsung canceled the big tech event that usually happens in New York due to the global pandemic situation. It will be an online-only event.

Much has been said about the phone Samsung Galaxy Note 20 series. The Plus version may use a 108MP camera and a 4500mAh battery, a periscope camera, but sans a 100X zoom function. The phone may feature a mirrored design as per several renders.

The Samsung Galaxy Note 20 Ultra may still be introduced with Seamless Display tech. A flatter display can also be expected with a rounded rectangular shape.

The Samsung Galaxy Note 20 may only have 60Hz refresh rate but the Plus and the Ultra could have 120Hz. We’re also looking forward to that new camera function. We were already told it won’t inherit Galaxy S20’s focusing issue. The phone may also come with an energy-saving HOP display tech.