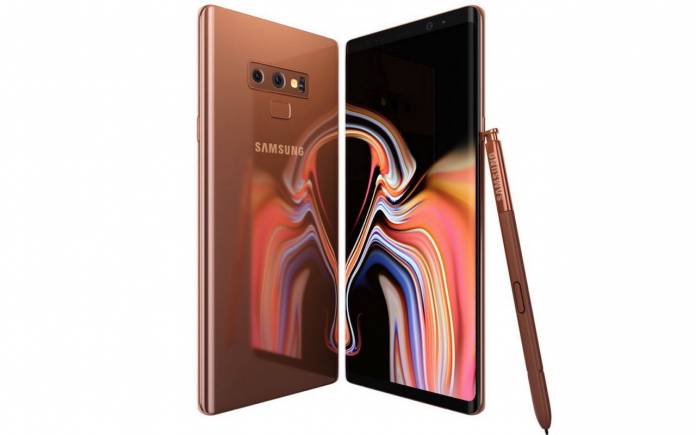 The Samsung Galaxy Note 20 series will be arriving in June. We’re certain of that and we know the regular Galaxy Note will come with a Galaxy Note 20 Plus variant. There won’t be an Ultra version. Only two Galaxy Note phones will be introduced. It really is never too early for leaks and rumors as the official unveiling is still three months away. However, a lot of details have already surfaced about the Galaxy Note 20. Recent renders proved a bigger phone that may also feature a periscope camera, a 4500mAh battery, and a mirrored design.

We also learned the Samsung Galaxy Note 20 may drop the 100X zoom function but may use 16GB of RAM and a bigger fingerprint reader. Galaxy Note 20 and Note 20+ displays will be different from each other. There is also that info the Galaxy Note 20 will no longer use Time of Flight (ToF) sensor.

Today, we’re hearing about the possible Galaxy Note 20 colors. We’re thinking of the basic colors like black, blue, and white but a Copper Samsung Galaxy Note 20 looks really nice. The phone is also said to arrive in Green and Gray.

The copper will only be for the Plus version together with a Black Galaxy Note 20 Plus. The copper could even be Gold or something similar like maybe Rose Gold. We like the idea of different colors for the Galaxy Note 20 and Galaxy Note 20+ for the two to be easily distinguished.

Expect more information about the Galaxy Note 20 and Galaxy Note 20+ will be made public. The next-gen premium flagship series from the South Korean tech giant is always anticipated so don’t be surprised if plenty of Galaxy Note 20 details are surfacing.

So far, we know the regular Galaxy Note 20 will come with a 4000mAh battery while the Plus version will get a bigger one at 4500mAh. The Galaxy Note 20+ will have a 6.9-inch LPTO display. We’ll confirm everything at the online-only Unpacked event in August. Let’s wait and see.