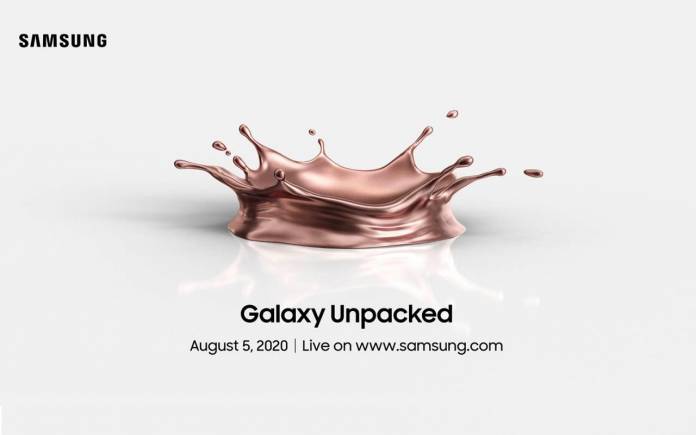 In about a month, Samsung will make another grand reveal of its premium flagship for the second half of the year. The Galaxy Note 20 series is expected to be unveiled on August 5, Wednesday, as we also mentioned yesterday. The poster has surfaced online so we can confirm the schedule of the online-only event. The Galaxy Unpacked 2020 will be a virtual event. It’s not exactly a first from the South Korean tech giant but perhaps the first major product launch event to be done online.

Usually, Samsung holds the Galaxy Unpacked in New York but the live event has been canceled due to the coronavirus situation. The Galaxy Unpacked 2020 will be streamed from samsung.com on the said date. Expect new Galaxy phones and tablets will be unveiled.

The Samsung Galaxy Unpacked 2020 event will be held at 10AM ET / 7AM PT on August 5. Head on to www.samsung.com to stream the tech event.

Based on the image, we can probably expect a Copper color option (or is it Mystic Bronze?) and maybe a new S-Pen with the same color. The Samsung Galaxy Note 20 series will be the star of the show. Three variants may be introduced: the regular Galaxy Note 20, Galaxy Note 20+, and the Galaxy Note 20 Ultra.

The virtual event next month will confirm most of the things we’ve featured here. To review, here’s what we know so far about the Galaxy Note 20: a punch-hole selfie camera as sighted earlier this week, new camera function, and only 60Hz refresh rate on the Galaxy Note 20. The phones may also come with a flatter display and a rounded rectangle shape. We can also look forward to that Seamless Display tech, periscope camera, 4500mAh battery, and a mirrored design.