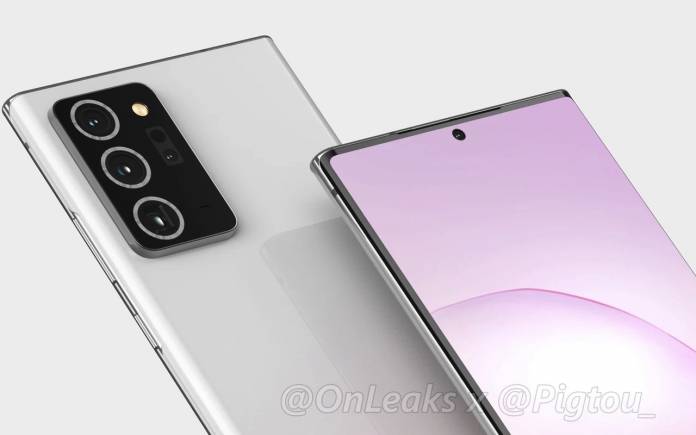 The Galaxy Note 20 series is Samsung’s next premium flagship offering. There will be two variants: the regular Galaxy Note 20 and Galaxy Note 20+. There won’t be an Ultra variant. The Galaxy Note phone series has become a favorite topic lately with new information and image renders being leaked left and right. A while ago, we told you about the Samsung Galaxy Note 20+ coming with a periscope camera and a 4500mAh batt. We also heard about the duo arriving with a mirrored design as per a recent render.

A lot has been said about the Galaxy Note 20. It may drop the 100X zoom function. The August launch event will be online only. Several designs, renders, and camera details have been leaked already but expect more will be shared.

The phone is also said to feature at least 16GB of RAM, bigger fingerprint reader, and a 108MP camera and a 4500mAh battery on the Galaxy Note 20+. The displays of the two phones will be different from each other. The release of the Galaxy Note 20 and Galaxy Fold 2 will be right on schedule. We’re looking forward to confirming if the Galaxy Note 20 will no longer use ToF. A 4G model will also be available aside from the 5G standard.

Looking at the dimensions, the phone measures 165mm x 77.2mm x 7.6mm thick (lwh). There’s only a slight difference from the Galaxy Note 20. It will also be bigger compared to the Galaxy Note 10+.

The design may still be similar to previous Galaxy Note phones but now with a curved design on the Plus variant. The non-Plus version will only have a flat display. On the bottom edge, there is the mic, USB Type-C port, and speaker grille. The S-Pen slot is now on the left bottom. Like the Galaxy Note 20, there will be a punch-hole selfie camera. On the rear, you will see a significant 10.7mm bump for the camera module bearing two camera lenses, a periscope lens, and a depth camera.