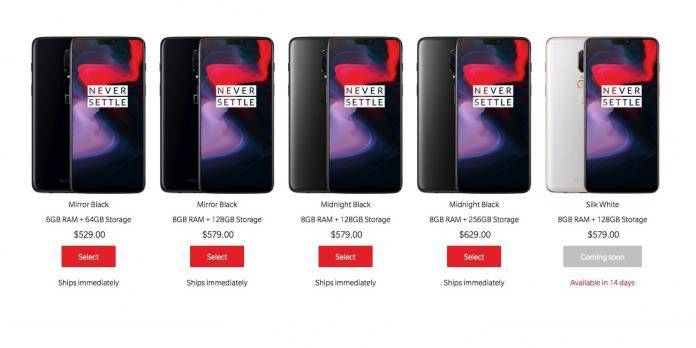 The OnePlus 6 has been a hot subject since we first mentioned it would have 19:9 display and run a Snapdragon 845 back in March. We learned the phone was in the works earlier than usual so an early announcement was also expected. The device soon started hitting benchmark tests and the Chinese OEM was generous enough to share a few hints here and there. Leaked images and specs were also being published by different sources but we always look forward to official news from OnePlus.

Before the official announcement last May 18, the OnePlus 6 has been teased to run on the latest Qualcomm Snapdragon 845 processor, 8GB RAM, and that it would have a notch. Instead of a June launch, the company introduced the new flagship this May but will be released in the US market starting June 1 with pre-orders opening one week before.

We haven’t done a hands-on but we’ve seen and heard enough about it. We gave you six reasons you should buy one: SPEED, IMAGING, DISPLAY, WATER-RESISTANCE, OXYGEN OS, and the BULLETS WIRELESS.

The OnePlus 6 features are enough for us to conclude that it stands out from other 2018 flagships in many levels. There’s the price that makes it the most expensive OnePlus to date and yet offers great value for money with the big storage capacity. The updated Alert Slider is more useful as it now switches between the Ring, Silent, and Vibrate to reduce distractions.

The absence of wireless charging helped make it still “affordable” in the premium category. The phone also delivers ‘the speed you need’ as made possible by the mobile processor that allows 30% faster performance and 10% lower power consumption, 4×4 MIMO, and 8GB of RAM.

The standard durability test performed by Zack Nelson aka JerryRigEverything tells us the phone will survive average, everyday usage. The OEM really “never settles” as it’s also releasing a special OnePlus 6 Avengers Infinity War Edition in key markets such as the US, UK, and India.

The OnePlus 6 arrives with the OnePlus Bullets Wireless which is the first wireless pair from the company. Even before the official unveiling, the device was accidentally leaked by Amazon.de with announcements of trade-in offers and Global Pop-up Events scheduled in Europe and North America. We noted prematurely that design isn’t too impressive but we still believe its worth your every penny.

The phone arrived with new materials yet with same craftsmanship. It comes with a glass back with 5-layer Nanotech Coating and an enhanced form factor. We said the phone would be able to resist some water and true enough, it launched with a water-resistance rating.

OnePlus decided to implement the notch design which surprisingly can be hidden. It also allows bigger and better display performance for a bigger screen real estate. The gesture controls turned out to be the improved Alert Slider.

When it comes to pricing the basic 64GB only costs $530. Twice the storage at 128GB is only $580 while the 256GB storage is only $630. The latter is pricey for some but still lower than the 64GB variants of premium flagships from other OEMs. This OnePlus 6 is clearly a winner in this area.

The notch is a key feature because it allows for a large display for preview and shows more stuff. The almost bezel-less display delivers a bigger screen so you’re able to do more and enjoy an immersive experience. To review, the phone comes equipped with a 6.28-inch Optic AMOLED display, 83.8% screen-to-body ratio, 1080 x 2280 pixel resolution, and Corning Gorilla Glass 5.

The Alert Slider reduces distractions as you can now easily switch to Ring, Vibrate, or Silent. The OxygenOS comes with meaningful features and smart software optimizations plus faster load-times and smoother animations.

When it comes to imaging, the phone boasts a 16MP + 20MP dual camera setup with Optical Image Stabilization (OIS). The system offers speed and is able to capture and shoot super clear images. The camera acts faster with 4K at 60 FPS but is also capable of super slow-mo function with 480 fps. Adding depth-of-field to images is the Portrait Mode. For easier editing, there’s a new video editor that allows you to manually add slow motion, apply reverse, add loop effects, and trim and filter videos.