It was more than a year ago when we first heard of the idea of a Razer Phone as Nextbit was acquired by Razer with the intention of focusing on mobile experience and design. The gaming company also teamed up with 3 to start working on such phone. A gaming-centric mobile device was promised to launch before year-end. It was even teased to be Razer’s biggest unveiling yet since the Razer Phone would be powered by a Snapdragon 835 and 8GB of RAM.

Before the official launch, the Razer Phone 64GB Black was spotted on 3G UK’s website. The Razer Phone was officially launched November 1st as an ultimate gaming phone with pre-installed Nova Launcher.

The phone soon went up for pre-order in the United States and went available on the online and offline Microsoft Store. The device works well with a Hammerhead USB-C in-ear headset since there is no audio jack. A few weeks later, the Razer Phone camera was said to receive further updates and optimizations, as well as, audio enhancements.

We’ve got a list of the best games to play on the phone’s 120Hz screen while Netlix can now be enjoyed on the Razer Phone with HDR and Dolby Digital Plus and then was updated with Dolby 5.1 Audio playback.

Razer CEO once teased a special edition Razer Phone with gold logo and it turned out to be the Razer Limited Gold Edition to celebrate Chinese New Year.

To further promote the gaming Android phone, Razer offered a free Leviathan Mini speaker for a limited time with a purchase of the Razer Phone. The latter also received Android 8.1 Oreo Developer Preview before the official Oreo version. 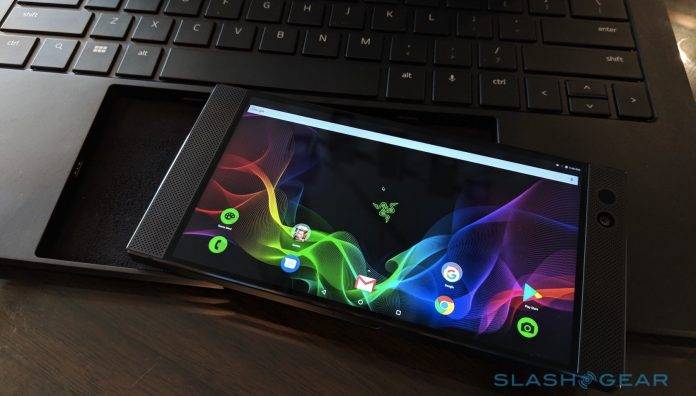 Everything is still an idea but we’re looking forward to the next-gen Razer Phone especially now there are several gaming phones being introduced like the Xiaomi Black Shark, ASUS ROG Phone, and the newly unveiled Huawei Honor Play.

Razer appears to be working on a new gaming phone. The company recently shared its Interim Results for the year. Some good news: revenues grew 38.5% from last year to $274.2 million, gross profit by 4.5% ($79.5 million), gross margin expanded 150bps year-on-year to 29%. Numbers have improved even the loss from operations down to 4.3% ($53.6 million).

If you’re not aware, the Razer Phone is a premium gaming phone equipped with a 5.72-inch Quad HD IGZO LCD screen, 120Hz UltraMotion display, 8GB RAM, Qualcomm Snapdragon 835 processor, 4000mAh battery, Qualcomm Quick Charge 4+, 12MP dual rear cameras (wide angle lens and dual-tone flash), and an 8MP front-facing shooter among others. It needs to have a follow-up and we’re expecting a new one will be revealed in a few months.

That Razer Phone 2 is a possibility especially the company commits to “continue its investment in driving the mobile business to take advantage of the enormous opportunities inherent in mobile gaming and esports”.

There is no official announcement but Razer mentioned the development of the second generation Razer Phone. These are the only words we gathered from the gaming company so let’s wait and see.