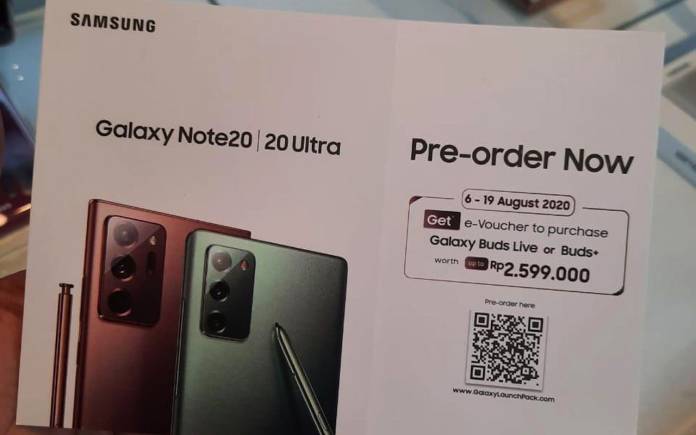 You can pre-order your Samsung Galaxy Note 20 or Note 20 Ultra now. Well, not really but maybe soon. This image has been shared by Slashleaks and it looks legit. But you know, anyone can do graphics and print a promo material, right? So yes, we’re still taking things with a pinch of salt. The photo shows the Galaxy Note 20 series in Bronze and Green (although at first glance, the Bronze is Red). The note says pre-order will run from August 6 to August 19.

There is no price provided but the card says if you order between those dates, you can get an e-voucher to purchase the Galaxy Buds Live or Galaxy Buds+ worth Rp 2599 ($179). The price is about the same price point provided by other leaksters. We know for sure the new earbuds will be called Galaxy Buds Live and not Galaxy Beans. They just look like beans as teased in an official video from Samsung.

The Samsung Galaxy Note 20 series will be announced together with the Galaxy Buds Live next week, August 5. We can probably confirm the Mystic Green and Mystic Bronze color variants. Much has been said about the upcoming Samsung Galaxy devices and expect more will be revealed in the coming days.

We’re looking forward to the enhanced Exynos 990 SoC on the Samsung Galaxy Note 20 to be sold outside South Korea and the US, the 25W charger, Xbox Game Pass, advanced camera functions, and 360 Spin. We can’t wait to confirm other details like that rounded rectangle shape, flatter display, Seamless Display Tech, periscope camera, 4500mAh battery, and the mirrored design. The 16GB of RAM and bigger fingerprint reader are most likely true. Of course, we won’t forget the 5G connectivity and 128GB base memory although a 4G model can also be expected.