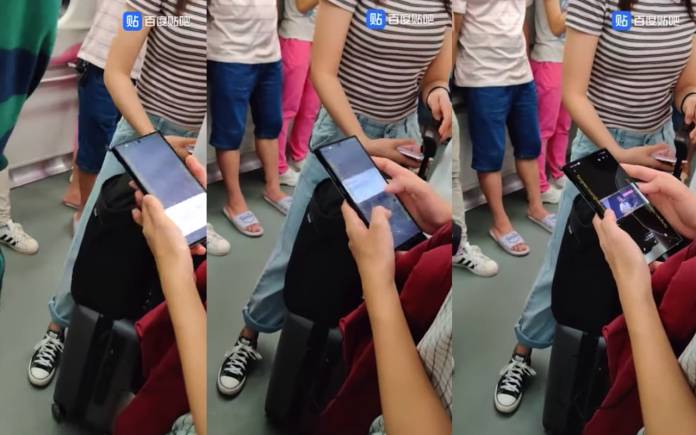 The whole truth is about to be uncovered. Tomorrow, the world will know about the Samsung Galaxy Note 10 that we’ve been featuring here since November last year. This is the first time the South Korean tech giant will be launching not just one but two Note models. Samsung has set August 7 as the next Unpacked event for the newest premium flagship phone offering. The Note 10 series will include the regular Note 10 and the Note 10+ which we previously called as the Note 10 Pro.

Before the Samsung Galaxy Note 10 phones are revealed, we’ve got word the Plus version has been spotted in the wild. Specifically, the Galaxy Note 10+ was sighted at a subway in South Korea. It’s not really surprising because the phone was already seen somewhere. The device was captured on video and looks like the one we’ve seen before.

We don’t think this is the last leak will be featuring before D-Day but definitely one of the last we’re sharing. The device on the video appears to be large with an almost bezel-less display. There is no notch, only a punch hole for the camera. Unlike the Galaxy S10, the placement of the selfie camera is in the middle.

Much has been said about the Galaxy Note 10. We’re just excited to confirm several things like the protective phone covers, pricing, absentee 3.5mm headphone jack, 5G support, AI ISO, Smart ISO, three-stage variable aperture, UFS 3.0 storage, 12GB of RAM, and a 5x zoom camera module. We can also expect a Sound on Display with 19:9 aspect ratio. That keyless and buttonless design is also something to look forward to.

As with most Samsung Galaxy flagships, the Note 10 will be powered by either Exynos 825 Octa-core or Snapdragon 855. It’s not using the latest Qualcomm Snapdragon 855+ yet. Other features include wireless charging, 25W-charging battery, and a unique rear quad camera setup.