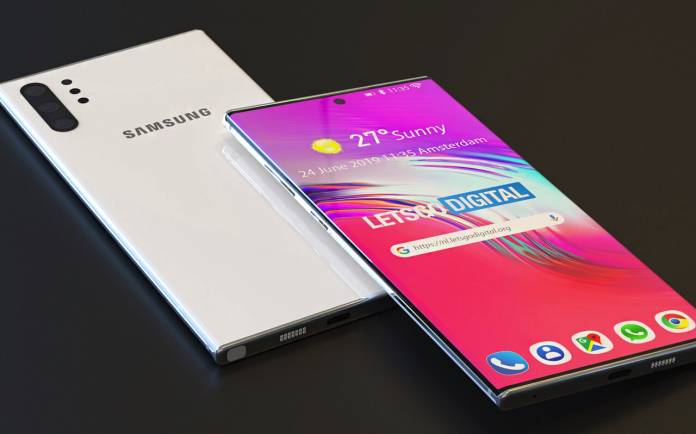 One area that’s regularly discussed when it comes to a new smartphone is the camera. Mobile photography is definitely bigger and more advanced these days, thanks to several innovations and new technologies. The Note 10 series is Samsung’s next premium flagship and so we’re looking forward to getting our hands on one and reviewing the cameras. We’ve been saying the Note 10 will implement a quad-camera system, an improvement from the triple rear shooter setup. The four rear cameras may only be available on the Note 10+ version as made possible by the addition of a ToF sensor.

No doubt the Galaxy Note 10’s camera will be impressive. We already know it will take advantage of a three-stage variable aperture. Earlier, we shared with you details about the Note 10+ and how it will be more powerful. More information about the Note 10 duo can be expected until the official Unpacked event happening next month.

The latest note we received was from a trademark application filed by Samsung. What appears to be camera features, specifically AI ISO and Smart ISO, have been sighted. Both features reached the IPO and the EU IPO.

The two ISO references could be one and the same. AI ISO could also mean Smart ISO as the camera can detect and be “smart” about identifying objects in the frame. Nothing much has been explained but they could also refer to AI-powered light sensitivity of the cameras.

Taking photos in low-light environments and conditions have always been challenging but with the help of software, photos can be auto-enhanced in real-time or even after capturing them. AI (artificial intelligence) can greatly help any phone in fulfilling some tasks. ISO on the Galaxy S10 ranges between 50 to 800. It can be larger on the Galaxy Note 10.

The idea is that AI will adjust the ISO automatically. It will depend on current lighting conditions. The Samsung camera system may also take into consideration the Time-of-Flight (ToF) 3D depth camera which is expected to be a special feature of the Note 10+.