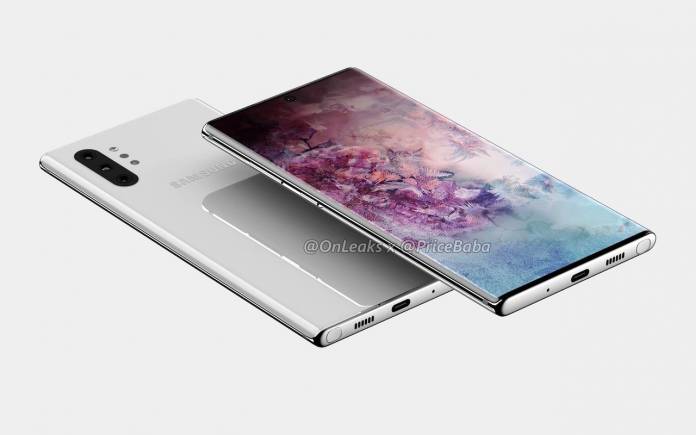 Last week, image renders and a 360-degree video of the Samsung Galaxy Note 10 Pro were released. Rumors and renders are always welcome until Samsung makes an official announcement. OnLeaks and 91Mobiles worked together to come up with the images, giving us an idea of what to expect. Today, we’re showing you another set of renders also from OnLeaks but this time, in partnership with PriceBaba. We see the Pro variant of the smartphone in white-silver, boxy form that looks sturdy even with the curvy display screen.

The Samsung Galaxy Note series here is similar to the Galaxy S10 but with significant changes. For one, the orientation of the cameras is different. Instead of horizontal, camera placement is now vertical.

The edge-to-edge display of the Note 10 Pro includes a camera hole for the selfie shooter. The large screen measures 6.75-inches. The whole device will probably measure 162.3 x 77.4 x 7.9mm. There may be a rear camera bump of 8.5mm for the quad-camera setup.

There is no telling if the Samsung Galaxy Note 10 Pro will come with a dual selfie camera system like the S10+ but it’s not an impossibility. When it comes to the four-rear cam system, it may be similar to the Samsung Galaxy S10 5G with three cameras plus a ToF (3D depth) camera. We can expect these three– 12MP primary, 12MP telephoto, and 16MP ultra wide-angle lens–or maybe even better.

The Galaxy Note 10 Pro may also remind you of the Galaxy A9 (2018) phone when it comes to the main cameras. This one will implement an on-screen fingerprint sensor because we don’t see any rear scanner.

It was mentioned before the Note 10 may come with a button-less or keyless design but we see some on the left edge. Meanwhile, the bottom edge shows the USB Type-C port, MIC, S-Pen slot, and loudspeaker grill. Also shown on the images are the following: SIM card tray on near the camera module on top edge, IR blaster, and secondary mic. We don’t see any 3.5mm audio jack or a Bixby button.

Other specs of the Samsung Galaxy Note 10 Pro could be are as follows: 6.75-inch screen, 1440 x 3040 pixel resolution, HDR 10+ support, Snapdragon 855 or Exynos 9820 processor, max of 12GB RAM, UFS 3.0 storage, and 4500mAh battery with 45W fast charging tech. When it comes to release date, the Samsung Galaxy Note 10 may launch sometime in August. The release will follow immediately in key markets.