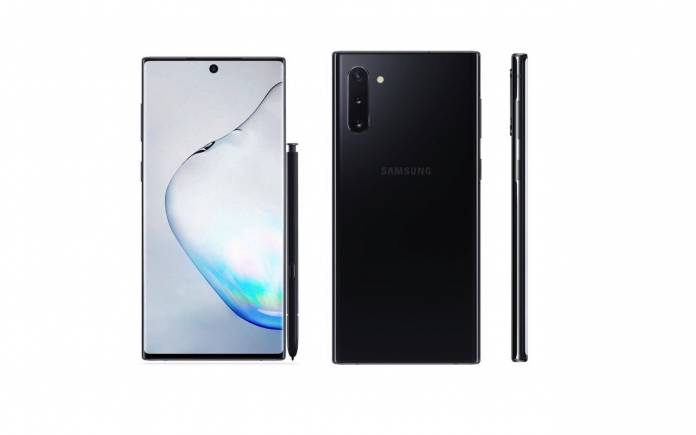 In less than a month, we’re expecting the Samsung Galaxy Note 10 will be unveiled. It will roll out together with the Note 10+ which was called earlier as the Note 10 Pro. The Note 10 series has been part of the rumor mill since November last when we first said the next-gen Note will come with a bigger and better screen. The phone series is said to come with an S Pen camera according to a patent granted, a quad-camera system, fast-charging 4500mAh battery, and a keyless design among others.

Several renders have surfaced already starting back in May and then followed by those 5K renders and a 360-degree video. First set of Samsung Galaxy Note 10 Pro renders showed a quad camera setup. We’ve also seen the Note 10 protective film, size comparison, and curves being shown off.

For MySmartPrice are new renders of the Samsung Galaxy Note 10+. You can see the larger Note variant in Black. and Silver. Young tech enthusiast Ishan Agarwal (@ishanagarwal24) made the renders so we know there is a high probability the images are close to the final design.

Many things have already been said about the Samsung Galaxy Note 10 and the Galaxy Note 10+. We’re holding on to the idea that wireless charging may reach 20W, it won’t have a headphone jack or microSD card slot, and that the Note 10+ will only have a 25W charging battery. The Note 10 may be revealed in New York this coming August. Samsung has teased the Unpacked event already which is happening on August 7.

Those Galaxy Note 10e phone case renders and Note 10 Olixar phone cases out earlier this month showed us the possible design of the phone. Definitely, the Samsung Galaxy Note 10 Sound on Display is going to happen. Color options are as follows: Nebula Blue, Mirror Grey, Silver, and Black.