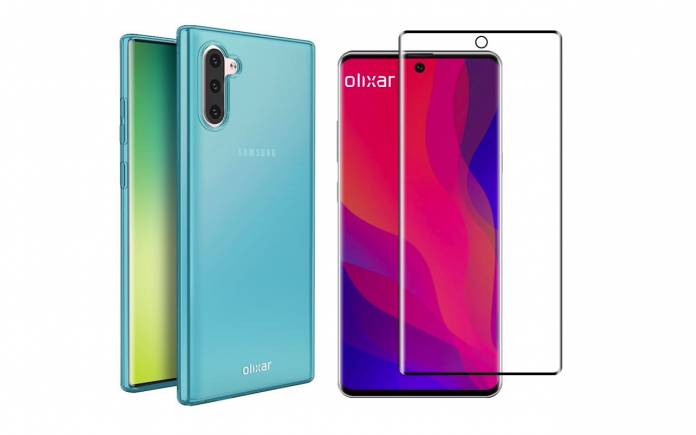 Mobile Fun is at it again. Now it seems to be published on the website is akin to hitting a benchmark or TENAA in China and the FCC in the US. A new phone is about to be unveiled when an accessory is leaked on a trusted site. And just recently, phone cases for the Samsung Galaxy Note 10 by Olixar has surfaced online. The images give us an idea of how the Note 10 will look like. There will be two Note phones: the Samsung Galaxy Note 10 and the Galaxy Note 10 Pro.

We’re not surprised that Mobile Fun already has access to the Galaxy Note 10. We’re just glad to see how the next-gen Note would look like after several image renders.

The photos on Mobile Fun are for the official phone cases from Olixar. It’s not too early for the Galaxy Note 10 and Galaxy Note 10 Pro accessories. The Android community welcomes such kind of reveals.

Looking at the photos, we don’t see any cutout for the earpiece. It could mean the Sound on Display technology will finally be implemented. The punch hole is similar to the Galaxy A80 and Galaxy M40. It also tells us the selfie camera will be placed in the middle.

We don’t see a headphone jack so Samsung may be doing away with it. We won’t be surprised again because Samsung has already decided to not include a 3.5 mm headphone jack on several Galaxy phones. The Bixby key isn’t part of the design but the power button and volume rocker appear to be present.

The Samsung Galaxy Note 10 series launch is still a couple of months away. Let’s wait and see because anything can still change.