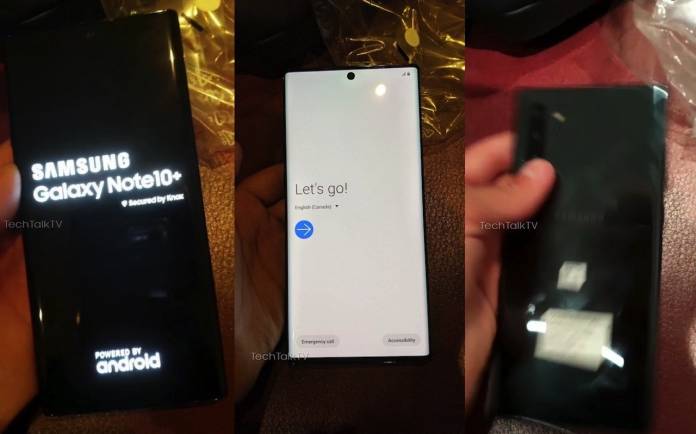 The second half of the year is starting with images of the Samsung Galaxy Note 10+ in the wild. You read that right: Galaxy Note 10+. It’s not the Galaxy Note 10 Pro as we’ve been saying and hearing the past few months now. TechTalkTV has shared this information on Twitter with screenshots, showing the phone’s home screen with the Samsung Galaxy Note10+ written. The device is still secured by Knox and shows a camera hole in the front center of what appears like an almost bezel-less screen.

According to TechTalkTV, the images sighted in the wild was shared by an Instagram user who claimed that he got a hold of the Note 10+. We’re assuming this premium flagship will be the bigger variant. It presents a boxy design that may remind you of the older Note phones.

Design-wise, there is the camera hole in the front. This means no under-screen camera but an onscreen fingerprint sensor will be present. There won’t be a pop-up selfie camera either because the punch hole camera will already be enough. The number of rear shooters may reach three or even four if we are to consider the Time of Fight sensor. The 64Mp ISOCELL sensor may not be used on the Note 10 series yet.

The Samsung Galaxy Note 10+ has been a favorite subject since late last year when we first heard it will have a bigger and better screen. The improved display is a given but we’re not sure how. Maybe the Sound on Display will be it. It won’t have a headphone jack and a microSD card slot so expect bigger onboard storage. We won’t be surprised if it starts at least 128GB.

Olixar phone cases for the Samsung Galaxy Note 10 appeared on Mobile Fun so we have an idea how the phone will look like. Of course, there’s also several renders and leaked images. A comparison of the Note 10 protective film, size, and curves was shown off recently and we felt then, the launch is getting closer because of all kinds of information available.

The Samsung Galaxy Note 10 may be unveiled in New York next month August. A lot of information is being spread including the idea the Note 10 Pro may only have a 25W-charging battery (not 45W) and a quad camera setup. We’re also looking at a keyless design.