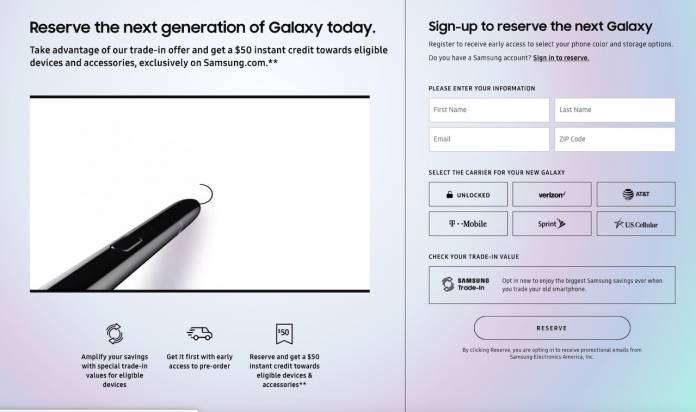 The Samsung Galaxy Note 10 is about to be “unpacked” in where else, an Unpacked event in New York. It’s happening on August 7. Samsung will be unveiling new mobile devices being added to the Galaxy ecosystem. It won’t be the Galaxy Fold…not yet. The next premium flagship offering from the South Korean tech giant will be the Samsung Galaxy Note 10 duo. Yes, there will be two–the regular Note 10 and the Note 10+. It’s a first from the company to be rolling out two Notes at the same time but they’re something to look forward to.

Samsung has put up the reservation page just now. If you want to ‘Reserve the next generation of Galaxy today’, feel free to sign-up HERE. There is no formal announcement yet but we know the next Galaxy smartphone will be powerful. We’ve shared with you what we know so far so maybe the information is enough for you to decide if you’re getting a new one.

The company is offering a trade-in program that will give you a $50 instant credit that may be used on accessories and other Samsung devices. This is an exclusive offer on Samsung.com which you can avail until August 7, 2019, 11:59 p.m. Eastern Time (ET). It’s only the Reservation Period but the device should be out in the market soon, maybe later in the same month or earlier in September.

Sign-up now so you can amplify savings with the special trade-in offers for eligible Samsung device. Doing so will also give you early access to pre-order. Reserve one now and receive that $50 credit you can use in the near future.

Samsung’s next Galaxy Note flagship is said to have AI ISO and Smart ISO, use a three-stage variable aperture, UFS 3.0 storage, 5G, 12GB RAM, Qualcomm Snapdragon 855 or Exynos 9825, up to 20W wireless charging, new rear camera setup, 5X camera zoom module, new S Pen camera, and 19:9 aspect ratio with Sound on Display tech. We can also look forward to a Samsung Galaxy Note 10 5G, that keyless design sans a microSD card slot and headphone jack, and the unique rear camera setup. The launch is happening in about a couple of weeks so we can expect more details and images will surface.