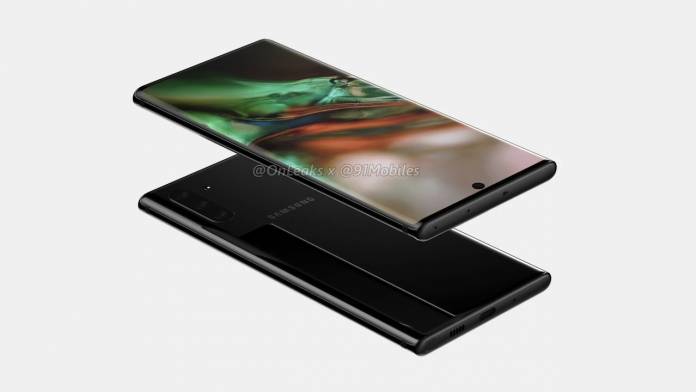 As we would always say, it is never too early for rumors and renders especially when it comes to premium flagships from the top mobile brand today. Samsung’s next-gen Galaxy Note offering is already under development and we believe its last stages of conceptualization. Even before 2018 ended, it was noted the Note 10 would have a bigger and better screen. Soon, it was mentioned it will come with a new S Pen camera, a quad-camera system, and a button-less and keyless design.

The Samsung Galaxy Note 10 with a quad camera setup may come in two different sizes. It will be a first from the line. The idea of multiple models at once is nothing new. For some, it has proven effective because consumers are given more choices.

The regular Note 10 will be joined by the Galaxy Note 10 Pro. It’s not the final name yet but the other Note phone could also be known as the Note 10e with a smaller battery.

Samsung’s Note 10 will already include 5G support according to Verizon. The Pro may also come with a 50W super or 45W fast-charging 4500mAh battery, and 19:9 aspect ratio display. What we shouldn’t expect from the Note 10: the 64MP CMOS being used, headphone jack, and buttons.

Last month, Samsung Galaxy Note 10 image renders were out but we’re not totally convinced by them. A preview of the rear camera setup somehow gave us an idea but here is a new set of image renders and a 360-degree video.

The photos show a front screen with a camera punch hole and three rear cameras. The idea of four rear cameras is still alive but we’ll have to wait and see.

OnLeaks (@onleaks) and 91mobiles worked once again to come up with these renders before Samsung makes everything official.

When it comes to specs and features, we’re looking at the following: 6.28-inch or 6.75-inch screen (Pro), Snapdragon 855 or Exynos 9820 processor, max of 12GB RAM, triple or quad-rear camera setup (with ToF sensor), UFS 3.0 storage, 45W fast-charging support, capacitive buttons for the Pro, and some 1440 x 3040 pixel resolution. The phones may run on Android 9 Pie but Android Q out of the box is not far from happening.