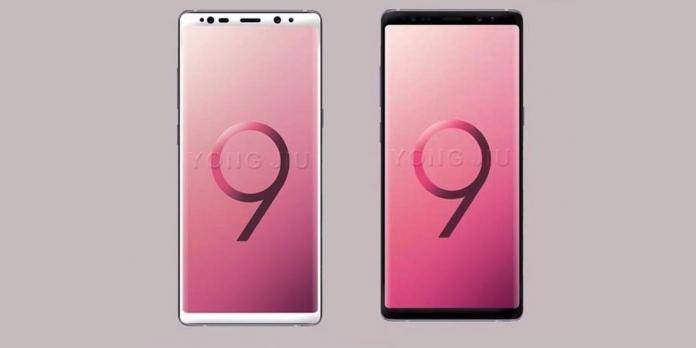 In less than a month, Samsung will be unveiling the next-gen Galaxy Note model. The South Korean tech giant isn’t skipping any number this time. The new premium Android phablet will be ready in blue and gold, with a new and improved S Pen, the latest ISOCELL Plus camera sensor, 512GB storage in some markets, with horizontal cameras, 6GB RAM, Snapdragon 845 processor, and an over $1000 price tag. It’s one of our hottest subjects the past few months mainly because it’s a follow-up to the successful Note 8 which followed the problematic Note 7 from two years ago.

Over the weekend, someone posted a couple of photos of what appears to be screen protectors for the Samsung Galaxy Note 9. This set is already the second one published. The two images below somehow confirm several details we’ve mentioned recently including the no-notch design, smaller bezels, and still no under-display sensor. The under-display optical fingerprint sensor will only be available on the Galaxy S10 due next year.

Samsung will be launching the Galaxy Note 9 earlier due to low Galaxy S9 sales. More importantly, Samsung isn’t giving in to the notch bandwagon. We thought the Note 9 would be the first to apply the under-display sensor but it will be the Galaxy S10. Much has been said about the Samsung Galaxy Note 9 including the idea it will come with an advanced S Pen with Bluetooth support, with Bixby 2.0, running Android 8.1 Oreo, Chinese certification, 6GB RAM, Snapdragon 845 processor, horizontal camera orientation, and the ISOCELL Plus camera sensor for more light.

Looking at the images below, we can say the Note 9 comes with dual selfie cameras with flash and an earpiece. Thanks to Ice universe for these photos, this Chinese leakster is actually a good source so the set is believable. In the next few weeks leading to the Samsung Unpacked 2018 event, expect more images, as well as, confirmations.