As we always say when there’s an upcoming premium Galaxy smartphone from Samsung, it’s never too early for rumors, speculations, and leaks. As early as August last year and even before the Galaxy S9 was released, we noted the Note 9 would apply an under-display sensor. Samsung has been preparing for an under-display optical fingerprint sensor but to be honest, there have been conflicting reports the past months. We also said the phone may have a new and improved S-Pen but we have yet to confirm that one.

After the Samsung Galaxy S9 and S9+, we started to anticipate the next-gen Note which is due before the end of summer. There is a possibility it will be released earlier than scheduled. The under-display optical fingerprint sensor may be ready for the Note 9 and the Galaxy S10 due next year. The Fingerprint On Display is under development as Samsung’s very own fingerprint recognition technology. So far, we know the Note 9 will be powered by a Snapdragon 845 processor and 6GB RAM, running on Android 8.1 Oreo out of the box. It has already received Chinese certification and rumor has it the phone will be released early due to low Galaxy S9 sales.

The Galaxy Note 9’s trademark has been filed by Samsung already and the device may roll out with Bixby 2.0. Recently on a benchmark, a Galaxy Note 9 with Exynos processor was sighted. This week, we’re seeing new images of screen protectors. We’re not sure if they’re designed for the Note 9 but it’s longer which means it’s for a longer device.

What’s interesting is the screen protectors actually show smaller bezels. The top and bottom bezels are rumored to have been reduced so the Note 9 could be shorter than the Note 8 but with a bigger display. Looking at the images, we see a similar camera and sensor cutouts as with the Galaxy S9. Features and specs won’t be changed as much but another source tells us the in-display fingerprint sensor may still be not ready. At this point, it can be confusing. 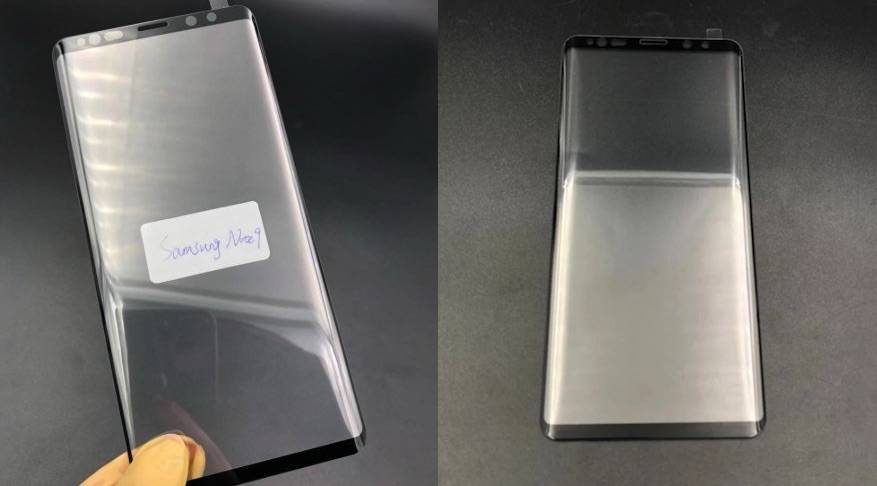 Check out the images below and see if they’re for the Galaxy Note 9: