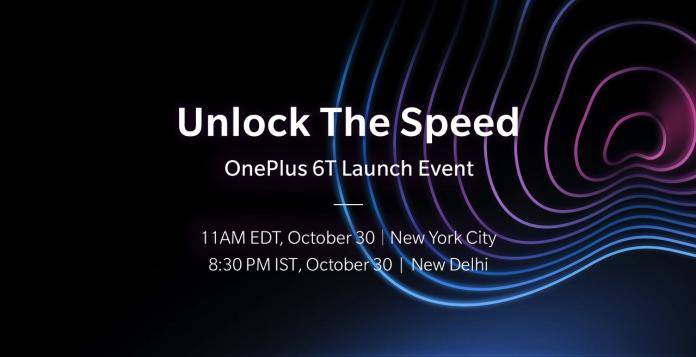 We were told earlier the OnePlus 6T Launch Event will be happening on October 17 in India. We weren’t sure if it was true then but now we’re getting confirmation it’s not happening–the 17th of October launch, that is. The official announcement will be held on October 30 instead, 11:30 AM in New York City (EDT) and 8:30 PM in New Delhi, India (IST). The Chinese OEM has recently shared the event poster that reminds us the new smartphone will ‘Unlock the Speed’.

The OnePlus 6T will offer a new flagship experience since the OnePlus 6. According to OnePlus, the new phone “marks an important step forward”. We’re assuming this is because of the in-display fingerprint sensor earlier shown off in a teaser video.

The OnePlus 6T is finally coming to a US mobile carrier. It’s been sighted several times already starting on Weibo. Its retail box also appeared, showing an under-display fingerprint sensor. A OnePlus 6T Red phone was rendered with a waterdrop notch and triple rear cameras.

New renders tell us there will only be dual rear cameras–not three. The idea of a Fingerprint-on-Display has been confirmed. Unfortunately, there won’t be a headphone jack nor wireless charging.

The OnePlus 6T will Unlock the Speed in many ways. It’s also one of the numerous Android smartphones that are due this October. The device has recently appeared on Amazon India where we learned it will be out on October 30 which is the same day of the launch.

This October 30, the launch event will happen in New York at Pier 36. In India, the OnePlus 6T will be unveiled at the KDJW Stadium within Indira Gandhi Sports Complex.

OnePlus is building up to the big launch so please expect more teasers and early announcements. The company will be sharing little preview on its forums and social media networks so let’s wait and see.