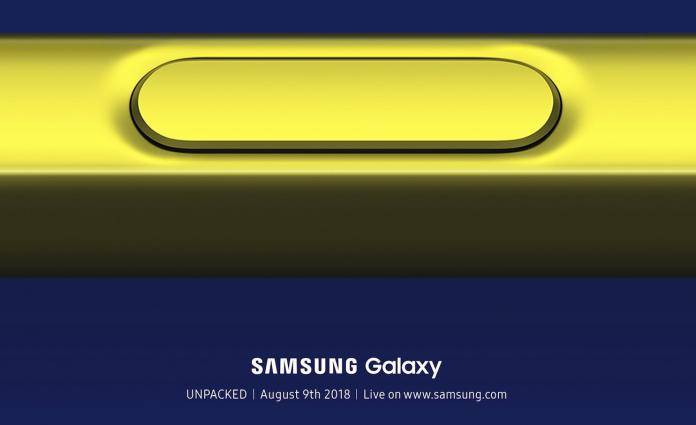 Samsung has already made known the date of the next Unpacked event where the new Galaxy Note 9 will be, well, unpacked. On August 9, the South Korean tech giant will officially announce the new Note 9 that we believe will feature a number of new enhancements including Bixby 2.0, Android 8.1 Oreo, 6GB RAM, Snapdragon 845 chipset, and a new and improved S-Pen. The phone will maintain the rear fingerprint sensor as the Fingerprint On Display technology isn’t ready yet.

The Galaxy Note 9 trademark was filed by Samsung last March and back then we thought it would have the in-display fingerprint scanning tech even before the specs speculation officially started. Early reports about the under-display optical fingerprint sensor are conflicting and confusing. The Bixby 2.0 is a sure feature while the RAM and chipset details have hit Geekbench.

The Samsung Galaxy Note 9 may be released early due to low S9 sales and earlier than scheduled but then again a last-minute change was made to the design. Because of that, the device will no longer be early.

We gave you a preview of what we’re expecting to see and when and we know the S-Pen will definitely be upgraded alongside the implementation of a new Samsung ISOCELL Plus camera sensor, 512GB onboard storage as a special variant, and a horizontal camera.

The new stylus will be worth the upgrade for many reasons. Design-wise, we’re expecting it will look similar to the Galaxy Note 8 based on some renders.

August 9 will be the day when the Galaxy Note 9 with a new S-Pen will be revealed. We suggest you mark your calendars now and start a countdown. We’ll see if the Samsung Galaxy Note 9 screen protectors we sighted would turn out to be the real thing.

Last week, we noted how the Note 9’s S-Pen would be different. It will be better as it is said to be “the biggest update in the history of the S Pen” yet. We don’t have confirmation but the next S Pen is believed to arrive with remote control features. It could be similar to a powerpoint clicker with Bluetooth connectivity. With this feature, it means the stylus can be used for other purposes like capturing a photo. The S Pen can be used for media controls like pause, play, rewind, or forward. This may also mean the accessory will require a battery–most likely, a built-in one. This may also mean the stylus can be charged while inside the silo.

Top Chinese leakster Ice Universe (@universeice) shared something related and said, “the Galaxy Note 9 S Pen can be used to control long-range self-timer, control music playback, because it is a Bluetooth device, it will do something unrelated to the pen”. Looking at the teaser image, we can say the Note 9 S-Pen will arrive with a rectangular top which could be a result of the battery inclusion.

We’re assuming the stylus will also be water-resistant and will be faster when it comes to quick finger operations and performance. Of course, the Bluetooth connectivity will be a major feature.

The Galaxy Note9 SPen can be used to control long-range self-timer, control music playback, because it is a Bluetooth device, it will do something unrelated to the pen. pic.twitter.com/WPS83xUskq