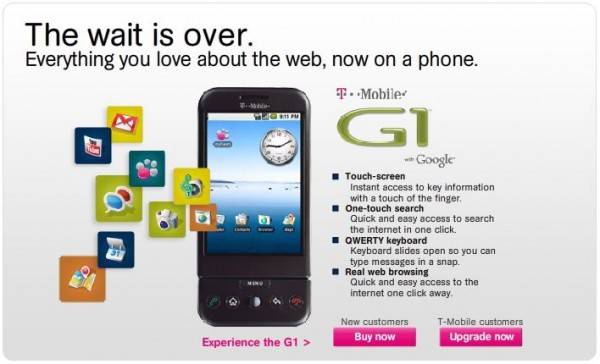 One San Francisco store was given the OK to sell the T-Mobile G1 a few hours early. The line grew rather long as people from all over the area lined up for a chance to get the G1 early. Many T-Mobile customers found a pleasant surprise on their doorsteps Monday morning as most of the pre-orders arrived 2 days early. Google finally released the source code for their Android operating system, however it appears it will only be for those who are running OSX or Linux.

Kyocera also announced they are working on an Android-powered handset. No details about the device have been released at this time. T-Mobile’s exclusive Hotspot Connect application was released into the Android Market this week allowing T-Mobile customers to connect to any T-Mobile Hotspot for free. The long awaited day came with the official launch of the T-Mobile G1, the first handset to run Google’s Android platform. TmoNews reported that there was to be an over the air update (OTA) for the G1 on the 23rd, but after no update was made available, reports changed the release date to November 2nd.

One concept of the Android interface surfaced in the Show Room for the Swedish software technology and design company Tat. Seen in the concept was a layout at the bottom that somewhat resembled that of the iPhone dock. Google announced that they will start allowing paid applications to enter the Android Market in early 2009. Another picture surfaced this week bringing hope to G1 owners who would like an on-screen keyboard, the picture showed an on-screen keyboard that very closely resembles that of Apple’s iPhone.

Instructions surfaced helping people activate their G1 at home without having an account, although to achieve this an activated T-Mobile SIM card is required. Hop-on is the latest company to announce that they are developing a phone to run the Android platform. Hop-on plans to unveil their Android in January at CES 2009. Stories are coming from all over the place stating that T-Mobile employees in non-3G areas know little or nothing about the G1 because they will not be selling the device.

Two developers of award winning Android applications TuneWiki and Shopsavvy, held an AndroidDevCamp in Dallas on the 25th to help developers get started with Android. HTC CEO Peter Chou, told Mercury News that G1 sales for 2008 would be more than 600,000 units rather than the 1.5 million reported to be sold already in pre-orders. Security researchers have already found a security flaw in the G1 that can potentially allow attackers to record keystrokes made within the devise’s browser application. Google is aware of this problem and states that it is not as bad as it appears and that they are already working on it.

Our Golla G1 Case Giveaway came to an end this week, we would like to take the time again to thank our sponsor Smartphone Experts for making the giveaway posible. I am going to pick up a Golla case myself, the cases were actually really nice and fit very well. I would also like to say thank you to all of our members for making this week another record breaking week for us here at Android Community!