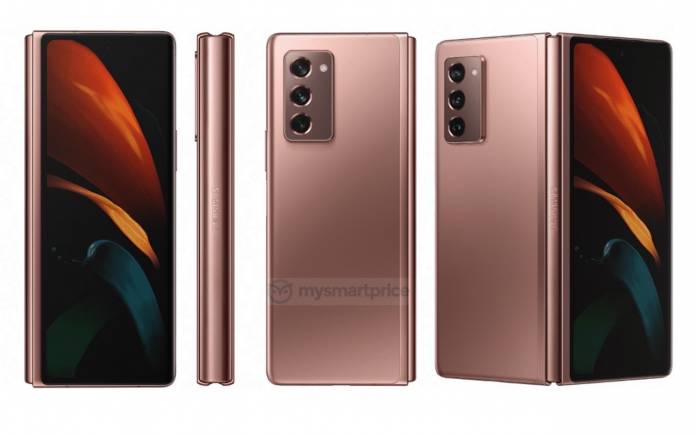 The Galaxy Unpacked 2020 will happen on August 5. No postponement or cancellation will be made. We’re sure of that. Samsung has been busy preparing the lineup and for the virtual-only event. It’s also been releasing teasers like that visual campaign, Unpacked trailer, and several leaked information from manuals to hands-on videos. Five devices will be unveiled, headlined by the Samsung Galaxy Note 20 series. Based on the silhouette presented in a video, the other four products will be the Galaxy Fold 2, Galaxy Watch 3, Galaxy Buds, and Galaxy Tab S7.

The Samsung Galaxy Fold 2 will be officially called the Galaxy Z Fold 2. We’re almost certain of that now as an image was leaked yesterday showing the device name on a bootup screen. The foldable phone is said to come with a gold version and enhanced cameras. The gold option could also be the same Mystic Bronze on the Galaxy Note 20, Galaxy Watch 3, Galaxy Buds, and even the Galaxy Z Flip 5G that was introduced last week.

The Samsung Galaxy Z Fold 2 5G may arrive with these upgrades and features: 25W fast charger, punch-hole selfie camera, two batteries but with lower capacity, larger screens than the 1st-generation model, Ultra-Thin Glass, waterproof with an official IP rating, 120Hz screen and other big improvements over the original foldable phone. We can also look forward to a more useful cover display.

A new set of images is available. The photos are the closest to the real thing according to our source. We see the Mystic Black and Mystic Bronze Galaxy Z Fold 2 5G. The phone looks a lot like the first-gen Galaxy Fold released last year but we know it’s been significantly improved.

The notch is no longer there as it has been replaced by a punch-hole. The cover display is larger. The Infinity-O punch-hole display can be found on the outside and the inside. Notice the slimmer bezels, and a triple rear camera system with LED flash. The phone appears slightly thicker.

Here are the specs and features of the Samsung Galaxy Z Fold 2 5G we know so far: larger 6.23-inch Super AMOLED Cover screen,7.7-inch Super AMOLED foldable display with 120Hz refresh rate, triple camera setup (64MP + 12MP + 12MP), 10MP camera on the inner screen, up to 512GB storage, 5G connectivity, and 4356mAh combined batteries with 15W wireless and 15W reverse charging tech. The foldable smartphone may be sold for $1,980. If that’s the case, then it’s not more affordable as mentioned before.