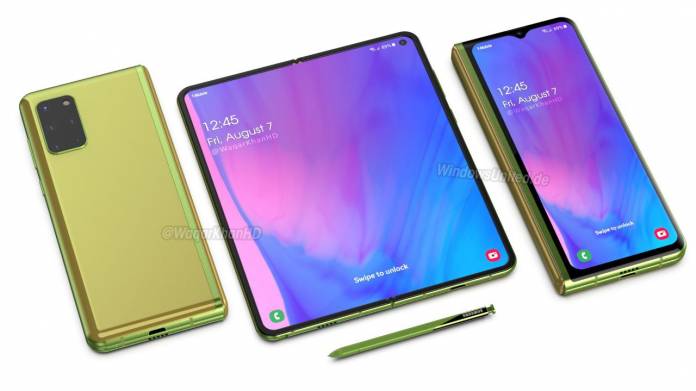 A lot of hopes were pinned on the Samsung Galaxy Fold since a lot of people were already bored with “normal” phones and were looking for the next big thing. But after many details, the actual product may have been a big disappointment because of the hardware issues. There was some hope again with the Galaxy Z Flip but reactions were mixed. Now if the rumors about the next-generation foldable display device are true, we might get a better version, at least based on early renders of the Galaxy Fold 2.

German tech website Windows United partnered with concept artist Waqar Kahn and they put together a render of the future Galaxy Fold 2. While no official information has been released, of course, they based it on all the rumors, reports, and patents that have been going around for the past few months. On paper, this design looks way better than the original Galaxy Fold and seems to have made a lot of improvements.

The original Fold had a notch that wasn’t so pleasing to everyone but the next generation may have a hole-punch cutout similar to what we see on the Galaxy S20 devices. The rear camera system is also similar to its four lenses and a time-of-flight sensor. The front display may also be replaced with the Infinity-V display which looks way better. These may just be renders but Samsung should take notice and maybe take notes if they haven’t yet finished the actual design.

A previous leak said that the Galaxy Fold 2 will have a 7.7-inch Infinity Flex Display with Ultra-Thin Glass. It also mentioned an Infinity-V display for the front cover and a hole-punch or under-display front-facing camera. It also mentioned the main camera set-up that we see in the Galaxy S20 series. So the render is pretty much based on these supposed specifications.

As to when we can expect an announcement about the Galaxy Fold 2, originally there were whispers that it would be July. But because of the events of the past few weeks, everything’s left up in the air for now. We’ll probably know in a few months whether they’re still on track or things may be pushed to later this year.