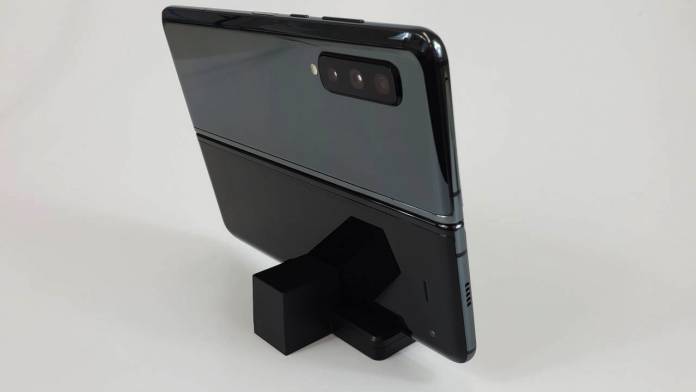 We’ve heard a number of details already including a punch-hole selfie cam as shown by a Galaxy Fold 2 leaked image. Bezel and hole dimensions were also leaked. We were also told the foldable phone will have two batteries with lower capacity.

The Samsung Galaxy Fold 2 will boast larger screens than the 1st-gen. It may or may not have an S Pen stylus input. An Ultra-Thin Glass similar to the Galaxy Z Flip can be expected as well. A Snapdragon 865+ processor will keep it running fast and smoothly.

Other important information we gathered also includes the phone being waterproof with an official IP rating. We doubt the Samsung Galaxy Fold Special Edition may still be released.

The Galaxy Fold 2 may also start with a 256GB base storage but still with competitive pricing. We’re assuming the foldable phone may already run on Android 11 Beta out of the box, and with triple rear camera setup (108MP primary camera + periscope camera + ultrawide-angle camera) 7.7-inch 120Hz screen, and S Pen support. The schedule will still be right on schedule and the price will be affordable. Other features: Samsung Pay, Bluetooth 5.0, Wi-Fi 6, USB Type-C port, NFC, GPS, wireless charging/reverse wireless charging, and stereo speakers.

The latest we have is the idea that Samsung will include a 25W fast charger bundled with the Galaxy Fold 2. It will be the same charger for the Galaxy Note 20 and Galaxy Z Flip. We can confirm the Galaxy Fold 2 will also arrive with 5G connectivity as model number SM-F9160 just received a 3C certification. The phone will come with the EP-TA800 charger with 9V (2.27A) of maximum power output or 11V (2.25A). Note that this is also the charger ready for the Galaxy A71, Galaxy Note 10, and Galaxy S20 series.