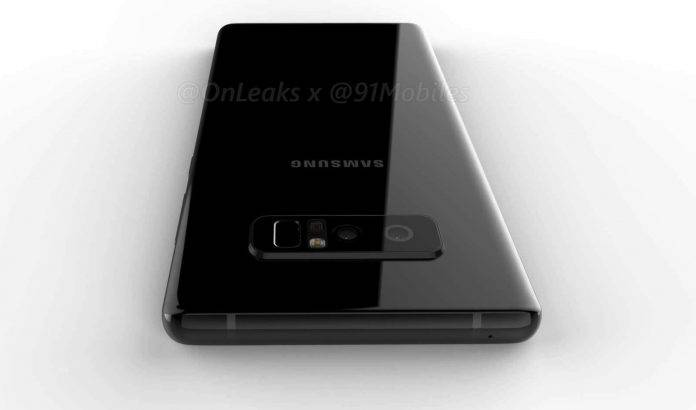 Samsung is set to reveal the new Note 8. It’s the next Note that will be introduced after the Note 7 fiasco and the Galaxy S8 duo. The latter pair seems to be doing great having been sold in high numbers despite the many minor complaints the South Korea tech giant has received. The premium Galaxy S8 and S8+ will soon be joined by the Note 8 which has been the subject of many rumors as early as January.

We’re excited to know the project codenamed as ‘Baikal’. It’s also known as the ’Great’ which will have a dual cam design and the same Android 7.1.1 Nougat and Infinity Display.

We’ve seen some leaked images a couple of weeks ago and learned that the phone will not have an in-screen fingerprint scanner. The phone is expected to run on the latest chipset and might be unveiled earlier than IFA 2017. There is a possibility unveiling will be on August 26 in New York.

After specs are outed, we’re seeing a new set of Samsung Galaxy Note 8 renders and a 360 video. These are exclusive images but recently leaked for public consumption. The phone still uses a stylus and is said to be available for €999 which is about $1,118.

Just like the upcoming Galaxy C10, the Samsung Galaxy Note 8 will also sport a dual camera. Looking at the images below, the phone will have some obvious camera bump and almost bezel-less design. There’s also the front camera, iris scanner for face unlock, USB Type-C port at the bottom, 3.5mm audio jack, speaker, and a silo for the S Pen.

We heard the phone will have the following specs: 6.3-inch screen, Super AMOLED panel, Infinity Display, Snapdragon 835 or Exynos 8895 processor, 6GB RAM, 12MP dual camera setup, and a 3,300mAh. We can also expect wireless charging and fast charging technology to be available. Just like the Galaxy S8 and S8+, this Galaxy Note 8 will also be integrated with DeX.