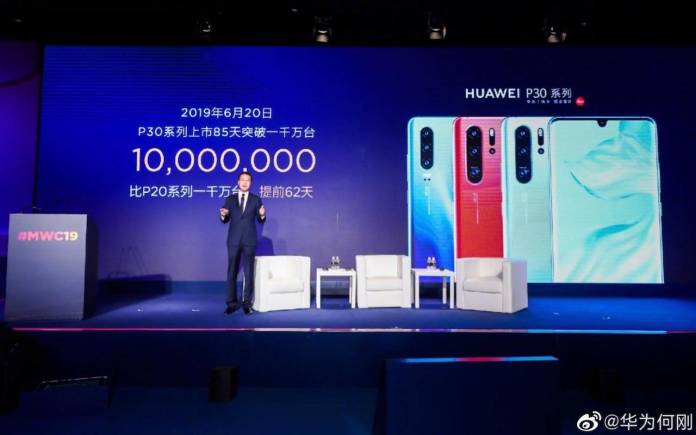 Huawei isn’t going anywhere. Despite the numerous challenges the company is facing, it will remain. We have a feeling the Chinese OEM will be stronger than ever once the US trade ban is over. The Android community is still not sure about the future of the No. 2 mobile brand today but we know it’s fighting. Some good news are being reported like the Honor phones getting a slice of Pie and Honor 20 global sales taking off amidst the US trade ban.

Last week, Huawei confirmed its smartphones will still receive Android Q and provided a list of which models. A MediaPad M6 tablet is about to be revealed while another Huawei foldable phone is said to be in the works. It may be business as usual for the company soon as an executive revealed that it sold 10 million units of the Huawei P30 flagship since launch.

At the MWC Shanghai, Huawei revealed that it hit an important milestone within three months. That’s despite the challenges in the United States. Well, sales shouldn’t be an issue because Huawei isn’t officially sold in the country. This year has been impressive because the previous Huawei P20 series hit the same mark in five months. It’s faster this year although we’re not sure if the Huawei P30 numbers are included.

The Huawei P30 phones sit on top of the benchmarks so we’re not surprised if they are selling fast. Interestingly, we noted earlier that revenue is being hit hard by US trade ban and that Huawei may lose billions. As for the Honor brand, the Chinese tech giant is assuring the public that the latest Android phones are still getting a major update as with existing Huawei devices.

Huawei seems to be doing everything in its power to make sure it will sell. It’s been preparing for the worst because its future may be affected in different ways. Even if the US temporarily eased limits and Google’s warning of bigger national security risks.

Huawei has been testing the Ark OS as a replacement for Android and the Aurora OS from Russia. It also started using NM Cards instead of SD Cards. To be honest, if all goes well, Huawei may beat Samsung but it may take time.