Before those Huawei Mate 10 variants officially roll out in the market, the top Chinese OEM still has the Mate 9 to work on. We know it runs EMUI 5.1 already but we’re more interested when the Android O version will be available. The company has started tinkering on it a few months ago and now that Android Oreo is ready, it’s only a matter of time before Huawei makes an announcement.

A leaked screenshot here shows a Mate 9 running Android Oreo which tells us it is coming soon for more users. Huawei must be testing the preview version and has reached Geekbench already. We’re assuming a few weeks before Huawei rolls out the official OS update. 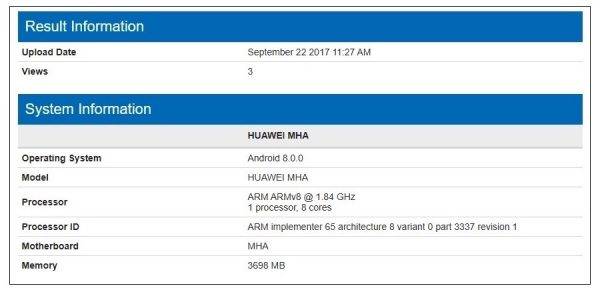 Huawei hasn’t made any related promo, teaser, or announcement yet but the update is definitely under development and testing. The Mate 10, Mate 10 Pro, and the Mate 10 Lite are expected to run Android 8.0 Oreo out of the box so the new platform version should be ready for its predecessor as well.

Manufacturers and top OEMs have been busy lately in releasing Android 8.0 Oreo updates recently for their products and we know more will make similar announcements soon. We were told the Galaxy S8 is getting a beta firmware while the Nexus Player is ready to receive the cookie version. Other phones that will get the Oreo update any day now include the Moto G4 Plus, Nokia 8, Google Pixel, Pixel XL, the latest Honor phones, OnePlus One, Xiaomi Mi 5s, and the Mi 5s Plus.

VIA: The Android Soul