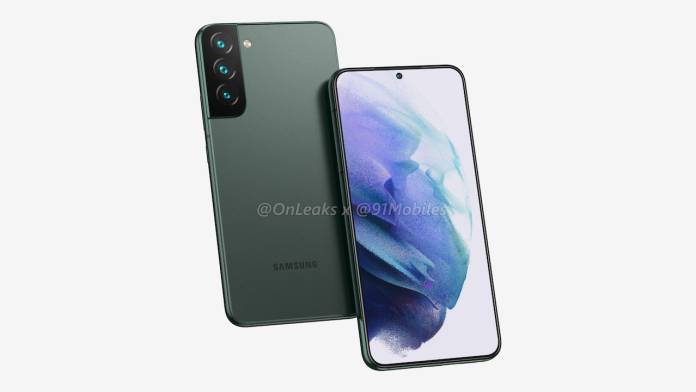 Green smartphones are probably not new but they are a bit uncommon. We remember a green Pixel 5 before. As for Samsung, it launched a Mystic Green Samsung Galaxy Note 20 last year. A green Galaxy Z Flip 3 was also introduced. Even the Galaxy Z Fold 3 received a Phantom Green model. The upcoming Galaxy S22 Ultra may also be released in green. This is apart from the Burgundy Red or Dark Red version we’ve been seeing part of the image renders. Of course, there’s also the classic Black and White models as well.

A green Samsung Galaxy S22 Ultra may be attractive. Rumor has it the Galaxy S22 variant may also have a green color option.

A lot of details have surfaced about the Galaxy S22 Ultra. It may still have a 5000mAh battery and 45W fast charging. Early renders showed a waterdrop camera design on the rear.

We’ve shared with you camera details we know so far. Some Samsung Galaxy S22 Ultra case renders also surfaced on the web.

A few weeks ago, a dummy unit was spotted with interesting details that included a P-camera design. We look forward to that different camera and frame design, 10x zoom camera, and just 108MP camera–not 200MP.

We expect the phone will run on on Exynos 2200 or Snapdragon 898. It may not offer SD Card support. The S-Pen slot is almost confirmed so let’s wait and see until the next major Galaxy Unpacked event next year.