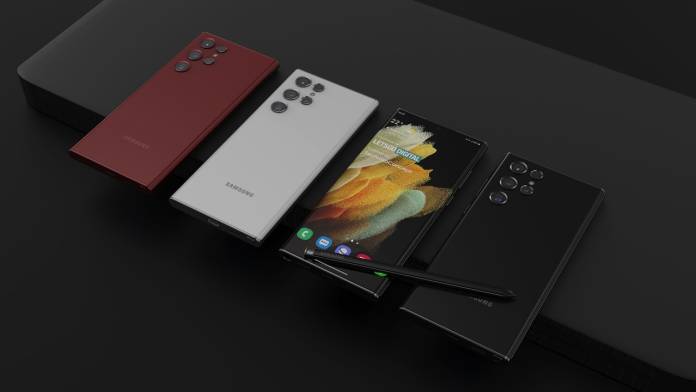 Among the three variants, the Galaxy S22 Ultra is perhaps the highly anticipated model because it will bear the highest specs and features. We probably know everything to know about the smartphone but of course, we still need to take things with a pinch of salt. We can expect more details and images will surface like this set we’re showing off here. This is the first time we’re mentioning it but the Ultra variant may still have a waterdrop design.

Until Samsung makes an official announcement, we’re expecting conflicting ideas will be presented. The Ultra is said to come with a P-shaped camera module. It may still look different as per another source and so these concept images (renders) have been designed by Technizo Concept (Parvez Khan) in collaboration with LetsGoDigital.

Rumor has it Samsung will use a waterdrop design this time. It means no camera island. If that is the case, then it is something similar to the Galaxy A32.

The cameras still appear to protrude just like the Galaxy A32. Galaxy S22 Ultra’s camera system will come with two telephoto cameras: 3x and 10x optical zoom. This water drop camera system also reminds us of the LG Velvet. The cameras are still positioned though in a P-array but without a camera island so everything still makes sense.

The Galaxy S22 Ultra will still protrude from the rear housing. Using this design is said to save on weight. This will matter since Samsung is planning to add an S-Pen slot. A lighter camera system is needed so this new design may work.

The concept images show us the Samsung Galaxy S22 Ultra colors: Burgundy Red, White, and Black. We also see the matching S-Pen units. The phone will come with an S Pen compartment where you can store the stylus. The S-Pen appears to be rounder.

The Galaxy S22 Ultra may not come with microSD card slot. This means no more memory expansion but the base 128GB should be enough. It will look more like a Galaxy Note than the Galaxy S21 Ultra with its 6.8-inch curved display, minimal screen edges, and large screen-to-body ratio. The selfie camera may be 40MP.

When it comes to the main camera system, there will be a 108MP wide-angle lens, 12MP ultra-wide angle, and two 12MP telephoto shooters with 3x and 10x optical zoom plus OIS and a laser autofocus lens with flash. It will run on One UI 4 and Android 12. It will also be powered by Samsung Exynos 2200 with AMD RDNA 2 GPU or Qualcomm Snapdragon 895 processor. Battery will be 5000mAh with 45W fast charging.