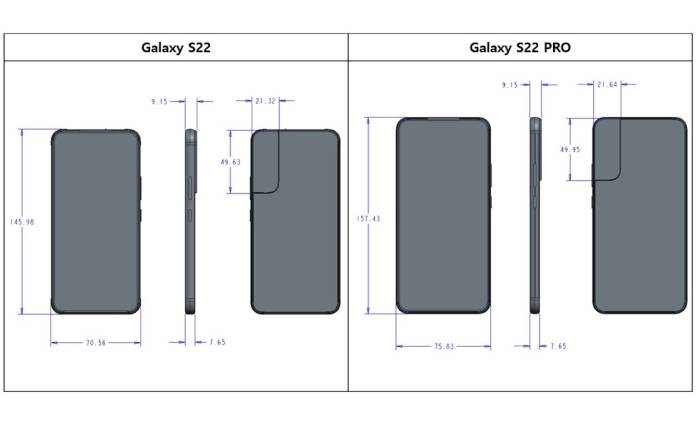 The Samsung Galaxy S22 series’ future is looking bright. As in every year and despite the chip supply shortage, new Galaxy S22 phones are expected to be introduced next quarter. It will be the next-gen premium flagship offering from the South Korean tech giant. The phones are said to be unveiled maybe in February since the Galaxy S21 FE will be announced silently in January. Until the next major Galaxy Unpacked event, we can anticipate more details and images will surface.

Much has been said about the Galaxy S22 phones and we know more will be revealed. Recently, we told you about Galaxy S22 Ultra camera details. They are believed to still come with 25W wired fast charging.

We have an idea about the design of the Galaxy S22 phones because a lot of renders have surfaced. Even phone case renders have been sighted. Dummy units have also been spotted with interesting details.

The latest set of images tells us more about the dimensions. The illustration also shows the S-Pen slot, buttons, and overview of the slot positions. Our source shows a number of possibilities. We can’t say if these are the final numbers.

The dimensions for all three models are as follows:

The first two phones are larger than the previous models (Galaxy S21 and Galaxy S21+). Interestingly, the Samsung Galaxy S22 Ultra is a bit smaller compared to the Galaxy S21 Ultra. We can see the built-in S-Pen slot on the bottom, left part of the device. We also see the P-shared camera module.