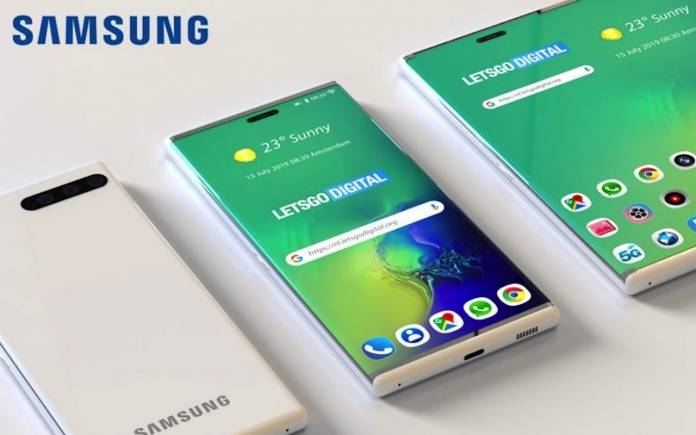 After the Samsung Galaxy Note 10 series, we expect to focus our eyes on the Galaxy Fold. The yet-to-be-unveiled foldable phone from the South Korean tech giant may be coming sometime in late August or September. After the Samsung foldable phone, there is the Galaxy S11 to anticipate until the next Mobile World Congress (MWC 2020). This isn’t the first time we’re mentioning the next-gen premium flagship Android phone but as early as now, we can say the Galaxy S11 will arrive with an expandable screen.

The information has no certainty yet but the expandable display was shown off in several patent images. We’re assuming this kind of screen will be an improved version of what the Galaxy Fold will use.

According to Ice universe (@UniverseIce), the Samsung Galaxy S11 has been confirmed with “Picasso” as the codename. The phone’s camera system will offer a substantial upgrade. The device will run on Android Q and One UI 2.x version.

Samsung may be implementing a punch-hole display like on the Note 10 but smaller. Don’t expect an under-screen camera yet from the South Korean tech giant. The company has introduced a number of new technologies that past few months but not all will be used on the Galaxy Note 10. Most of them may be implemented on the Galaxy S11 like the fast-charging 4500mAh battery we mentioned, under-display fingerprint sensor and selfie shooter, and the new 5x zoom camera module.

As with tradition each year, we can also expect the Galaxy S11 will be more based on the Galaxy Note 10. That being said, the S11 may also arrive with new AI ISO, Smart ISO, three-stage variable aperture, UFS 3.0 storage, 5G connectivity, Snapdragon 855+ processor, 12GB LPDDR5 Mobile DRAM, and a non-existent headphone jack and microSD card slot. We’re expecting more related Galaxy S11 information will be shared in the coming months.