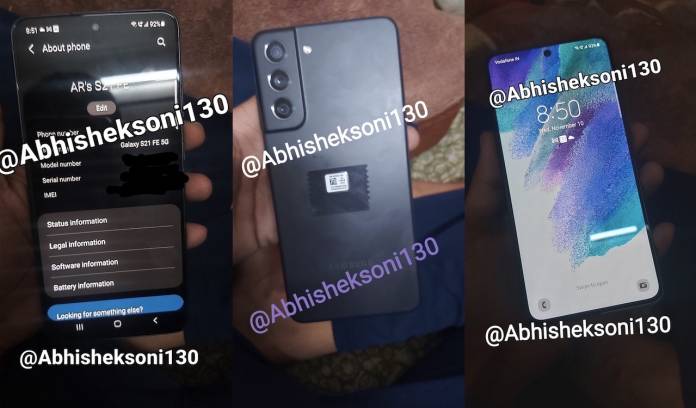 Ah yes. The Samsung Galaxy S21 FE is almost official. We only have to wait for the public launch which we believe will happen silently in January 2022. That is a month before the Galaxy S22’s unveiling in February. A lot of details and images have already surfaced over the past few months. The phone has been cancelled and then postponed and now its launch is on again. As early as April, the first set of image renders showed up. Samsung Mexico once leaked the upcoming Galaxy S21 FE.

The phone was believed to follow last year’s Galaxy Note 20. A 3D image model surfaced online. It was mentioned the phone could still be delayed because of the chip shortage problem. The phone may launch in limited markets only-Europe and US. The Galaxy S21 FE may be also out in four colors and with a new SoC.

A source just shared hands-on photos of the upcoming SAMSUNG S21 FE 5G. It has a plastic back so it remains lightweight. There is a 120HZ display. There will be no headphone jack. The cameras will be awesome so expect powerful imaging performance.

You may also view the hands-on video. Everything we need to know may have been mentioned already but let’s still wait and see for the official launch.