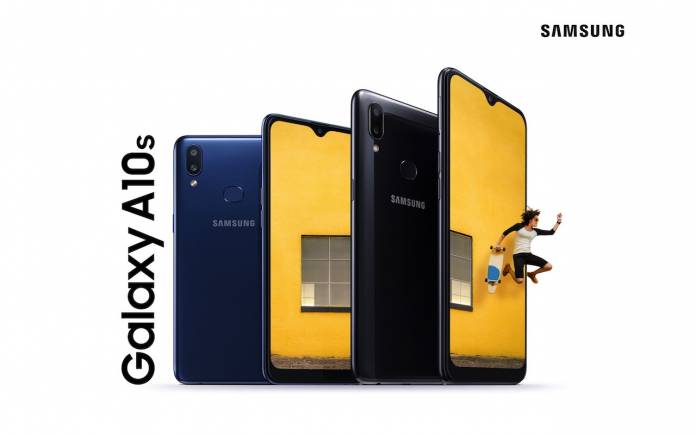 In this ‘Era of Live’, Samsung has a lot of new things to offer. It’s always ‘Ready to Go Live’ with new products. After the Galaxy Note 10 series, there is the Galaxy Fold to look forward to. We also remember the new Galaxy Tab S6 and the Galaxy Watch Active 2 that also received a special Under Armour edition. Next to be introduced is the Galaxy A10s as the newest mid-range phone offering. It was actually leaked together with the LG X2 2019 before the official launch.

We were also told the Samsung Galaxy A10s would debut in India with upgraded specs. Today, Samsung is officially showing off the new mid-ranger that comes equipped with powerful specs and features designed for connectivity and communication.

The Samsung Galaxy A10s boasts a large 6.2-inch Infinity-V screen with 720 x 1520 pixel resolution. The notch holds the selfie camera. At the back is a dual-camera system (13MP F1.8 and 2MP depth camera with F2.4) with AI, an octa-core processor, 2GB of RAM, 32GB onboard storage, microSD card slot for memory expansion up to 512GB, 3-slot Dual SIM card slot, and a 4000mAh battery. For security, there is face recognition plus a rear fingerprint sensor as biometric authentication measures.

There is no information on pricing but it could cost below $250. You can say it’s a refreshed version of the Samsung Galaxy A10 that was released last year. It also follows the Galaxy A10e variant made available by Boost Mobile a few weeks ago.