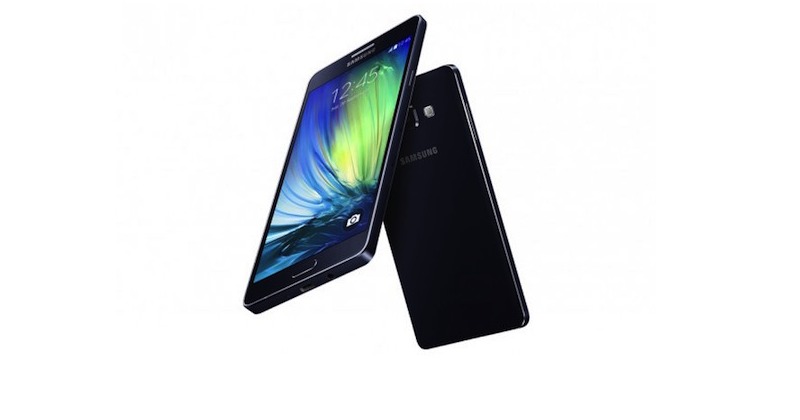 Samsung’s Galaxy A lineup is still available. So far, we’ve seen the Galaxy A3 and A5 in Taiwan, the A5 in metallic form in China, and that 3G version of the Galaxy A7 passing through FCC. Arriving soon is the Galaxy A8 which is still in the works.

This is just one of the three trademarks Samsung applied for as there’s also the A6 and A9. For now, we have more information about the all-metal A8 (SM-A800F). Don’t be too excited though as phone appears to be for China only. It’s a mid-range non-flagship but phone is believed to boast a 16 megapixel rear camera. Samsung could use the same sensor as used on the latest Galaxy S6 and S6 edge but we’re not sure.

As for the front-facing camera, the Galaxy A8 will have a 5 megapixel sensor. Other specs include a large 5.7-inch Full HD Super AMOLED display screen, 2GB RAM, 64-bit octa-core Snapdragon 615 processor, 16GB built-in storage, LTE connectivity, and a 3,050 mAh battery. Smartphone is expected to be sleek at 5.9 mm thin, weighing only 140 gram. Phone might run Android 5.0.1 and an enhanced TouchWiz UX.

We’re not 100% certain of the information provided but at least we have an idea about the arrival of the Galaxy A8. The latest mid-range phones by Samsung are pretty good. They won’t rival the high-end flagship smartphones but they’re good enough for those looking for a new Android phone with LTE connectivity and still within the budget.