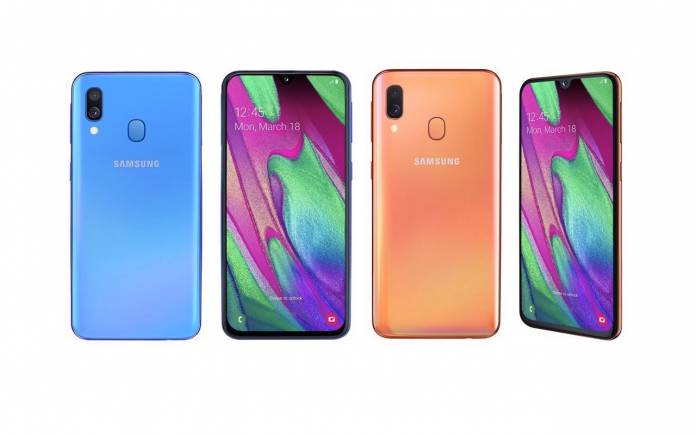 Samsung Galaxy A40 images showed up recently and as usual in this industry, we can only expect more to be released until the official and public launch happens. The phone is expected to be made public in the coming weeks but we have yet to hear any formal confirmation from the South Korean tech giant. What we have here now are new images of the phone posted on a Dutch website. The Samsung Galaxy A40 colors are listed already and it’s legit in Blue, Black, Coral, and White.

The four colors are illustrated on the website, featured in most angles. Specs include a 5.9-inch touchscreen display, 4G internet, dual-sim function, dual 16MP rear camera with 4K video recording, 25MP selfie shooter, and One UI based on Android 9.0 Pie OS.

Samsung’s Galaxy A40 will be available in the Netherlands. It goes after the Galaxy A30 and just before the Galaxy A50. The large screen is a Super AMOLED panel with Full HD+ resolution.

Other specs of the Galaxy A40 include 64GB onboard storage, 4GB of RAM, microSD card slot for memory expansion up to 512GB, dual 16MP and 5MP rear cameras (regular + ultra-wide), 25MP selfie cam with f/2.0 aperture. It has a notch as made possible by the Infinity-U display.

Belsimpel lists the Samsung Galaxy A40 with a €249.00 price tag which is around $283 in the US. No information if and when the new Galaxy A series phone will be released in other key markets.