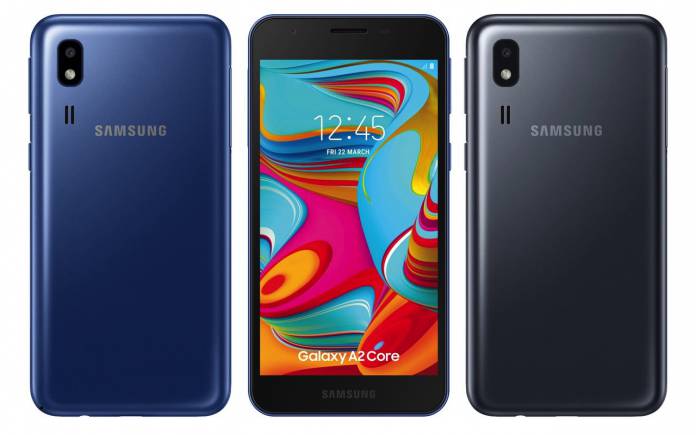 Android Go is another version of Android for low-cost smartphones. The Android team has introduced has launched this two years ago for emerging markets and so far, so good. The public has accepted this category of Android phones because that’s what many people can afford. Samsung only ventured into the Android Go arena last year. The first Android Go phone was spotted on Geekbench and was soon being tested in India. Samsung Android Go was introduced and we learned it had some slight changes. It’s not exactly Android Go but to be honest, it’s difficult to draw the line.

The Galaxy J2 Core rolled out in India as Samsung’s first Android Go phone. We haven’t heard anything about it since then but today, we’re learning a new Android Go phone from the South Korean tech giant will be available soon.

A press render has surfaced recently. A Galaxy A2 Core is said to be the first Android Go device from the Galaxy A series.

The Samsung Galaxy A2 Core Android Go phone looks a lot like the J2 Core. The display shows large bezels. We don’t think they will become smaller because the device is just low-entry.

When it comes to specs and features, Geekbench lists a Samsung Exynos 7870 processor, 1GB of RAM, and Android 8.1 Oreo. As for availability, we’re assuming Samsung will release the phone in India and South Africa this first half of the year.