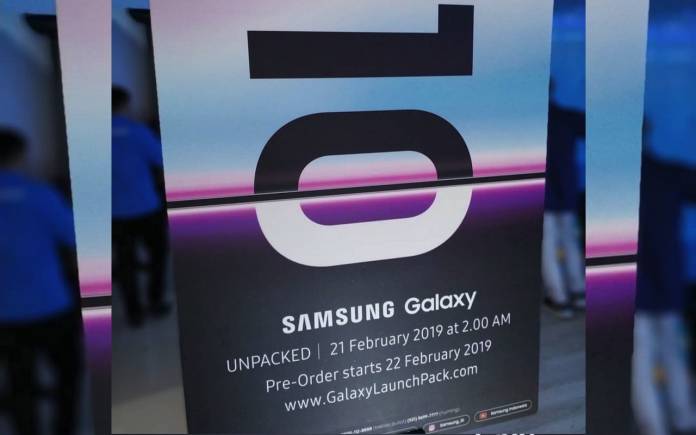 The Samsung Galaxy S10 will be unveiled in about two weeks. We’ve featured the 10th Anniversary Galaxy flagship series dozens of time already. We know a lot of information but most of them are unconfirmed. We’re guessing that by next week or the week of launch, the South Korean tech giant will release a series of teasers. The February 20 Unpacked event is official and we know the Mobile World Congress (MWC 2019) will be filled with discussions about the Samsung Galaxy S10 phones as they will be compared with other premium flagships.

After the formal launch, expect the Samsung Galaxy S10 to go up for pre-order. The day after February 20 (February 21 in Barcelona and Asia), the premium smartphones can be pre-ordered.

The teaser poster above was is from Indonesia. The phones will be announced, pre-order will start the following day, but sales will begin on the 8th of March.

We’ll be watching the Galaxy Unpacked event. If you can’t be there, check GalaxyLaunchPack.com for live streaming.

Our latest reports include the Galaxy S10 Beyond 1 phone being spotted in the wild, the phones having WiFi 6 as per an FCC doc, and the presence of a 3.5mm headphone jack. We’ve also seen the image renders and color options detailed and heard the fact that production is in full swing. We’re looking forward to testing the high RAM and storage capacity of the Samsung Galaxy S10 Plus, reverse wireless charging, and if cryptocurrency has a place in the S10 phones.