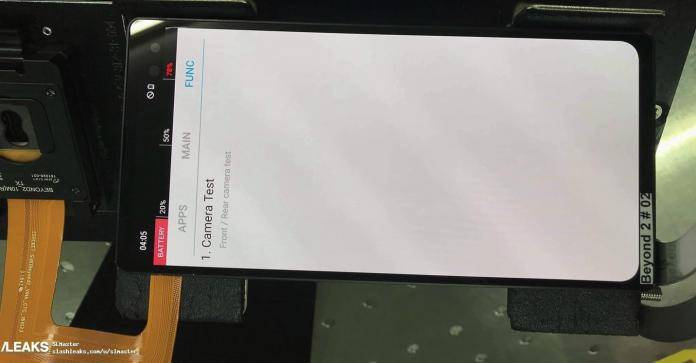 Could this be the Samsung Galaxy S10+? New images are surfacing online and we have a feeling more leaked photos will fill the Internet until the official announcement and unveiling by the South Korean tech giant next year. We’re expecting Q1 2019 will be all about the Galaxy S10 phones, at least, for Samsung. The Galaxy Fold foldable phone may follow but we’d like to focus on the 10th Anniversary Galaxy flagship first and highlight how the several variants will be better than the competition.

The latest image here shows what we believe is for the Galaxy S10+. It’s a photo of a Samsung phone showing a camera test page. It’s not clear but we know this is the Beyond 2 device.

We’re guessing this is a demo test phone that comes with an anti-leak film. This isn’t just a sighting in the wild a but test phone taken inside a Samsung factory.

Galaxy S10-related information and images are being leaked more frequently these days. We know launch is happening in a few weeks so we’re watching out for important details.

Samsung Galaxy S10 screen sizes were recently previewed and those new trademarks filed tell us the company could be introducing major changes. The three cameras are already major but we’re looking forward to Samsung’s in-display fingerprint sensor and the Infinity-O screen.