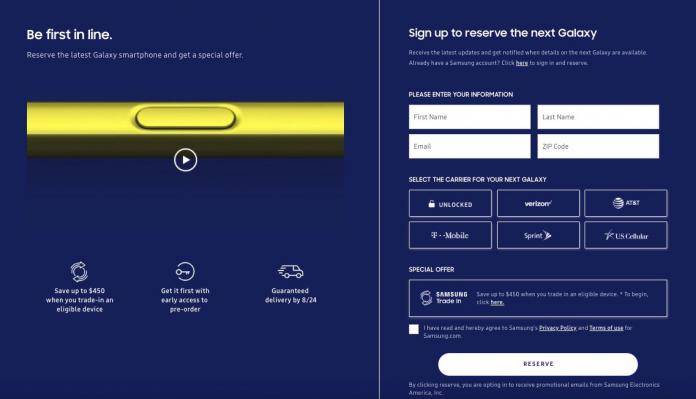 Exactly one week from today, Samsung will unveil the new Galaxy Note 9. The premium phablet is now being prepped for release. After a year of speculations, we’re down to days before the official announcement. On August 9, Thursday, the South Korean tech giant will introduce its latest flagship phone. Much has been said about the smartphone and we’re excited to confirm which information would turn out to be true. The official announcement will happen next week but as early as today, you can pre-order for the Note 9.

By now, you probably have an idea about the Galaxy Note 9 after dozens of related reports. You can even select your carrier now. Choose to buy an unlocked Samsung Galaxy Note 9 or buy from T-Mobile, Verizon, AT&T, or US Cellular.

Feel free to trade in an eligible phone from Samsung, Apple, LG, or Google. Maximum savings of $450 can be availed. You can trade in most of the phones from these brands as long as conditions are met like device still powers on and holds charge, normal wear and tear, no liquid damage, has an FCC ID, not blacklisted, no cracked seen, functioning display, factory reset, and no software locks.

Samsung’s special offer for those who will sign up include guaranteed delivery by August 24. Of course, the prestige of being one of the firsts is already a given.

There’s still no information on pricing but the Samsung Galaxy Note 9 should be around $900 or even reach over a thousand if we are to look at the Note 8 from last year. We’re expecting each carrier will make related announcements in the coming weeks.

Here are the specs and features we know the Galaxy Note 9 will have: 6GB of RAM, 64GB onboard storage (up to 512GB in some markets), ISOCELL Plus camera sensor, Qualcomm Snapdragon 845 chipset, Bixby 2.0, DeX compatibility, dual rear cameras in horizontal position, and a rear fingerprint sensor. Possible colors of the Note 9 are the following: Brown, Black, Gray, Lilac Purple, and Coral Blue.

The Samsung Galaxy Note 9 is expected to have the game Fortnite exclusive before other consumers can have it. A new an improved S Pen will come with it complete with Bluetooth connectivity and probably a battery.

In the coming days, expect more Note 9 information to be uncovered. We’ve seen those official and unofficial Galaxy Note 9 accessories. The phone is believed to be longer-lasting and be more spacious than ever.

August 9 is an early launch probably due to low S9 sales. We’ve also seen those screen protectors and learned what to expect from Samsung.

Sign up to reserve the Galaxy Note 9 on this page.