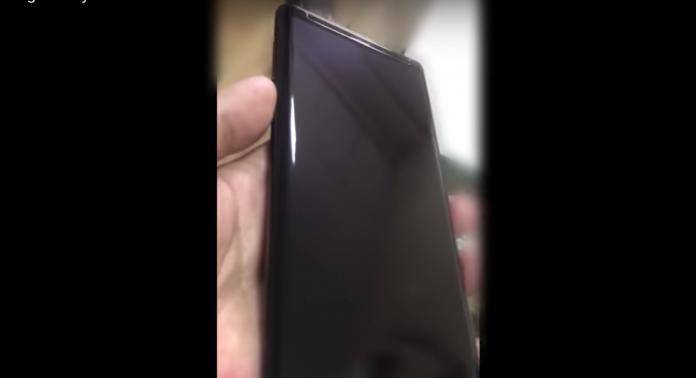 We’re just a few days away from the official unveiling of the Samsung Galaxy S9 but of course, some won’t be able to resist looking for all the leaks and rumors that are coming out of the woodwork. We’ve had our fair share of images and news tidbits the past few weeks, but now, for the first time, we’re seeing what is believed to be the first “live” video of the phablet. We see a few hints of what makes this different from the previous Note, but of course all of this is still unconfirmed.

We’ve seen previous “leaks” of what is supposedly the Note 9, but people noted how they seemed to be just clone versions and there were discrepancies in the logo and camera’s color tone. This time around, it seems legit as the source, Mobile Fun, has been pretty reliable when it comes to things like this. The video shows what looks to be a prototype given to case manufacturers so they will be able to start producing cases for the upcoming phablet.

In the video which is a little over a minute, we can see that the bezels for the top and bottom are a little smaller now, which is an indication of an improved manufacturing process. We also saw a horizontal dual rear camera setup and underneath that is the fingerprint sensor. The Galaxy Note 8 has them all in a row and it can sometimes be inconvenient to have the sensor in that place.

As for the other rumors about the Note 9, we of course cannot “see” them from this video. The battery is reportedly going to be at 4000mAh and we do hope that’s true as one of the problems with the Note series is that the battery drains pretty fast. There are also rumors that it will have 8GB RAM and 512GB of internal storage. However, it looks like that variant will only be released in the South Korean market.

We will know all of the real details by next week as the Galaxy Note 9 is set to be unveiled on August 9 in New York City. Samsung is hoping that this phablet will be able to revive their lagging sales and lift up their financial report for the second half of the year.