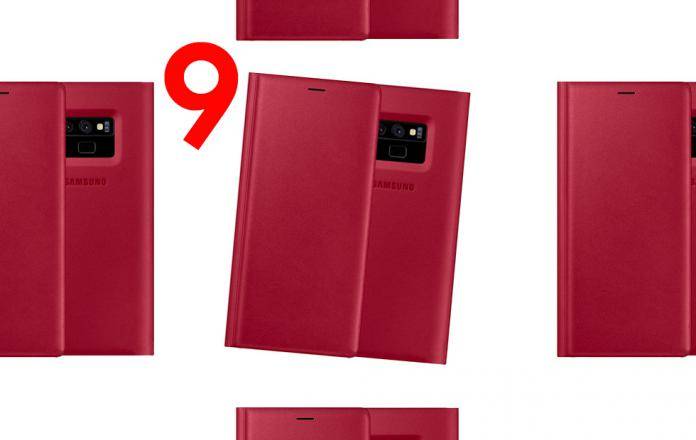 We could always wait for the official announcement and unveiling of the Samsung Galaxy Note 9 next week, but where’s the fun in that? We always see a flurry of leaks and rumors just a few weeks before the official launch and this time around, we bring you a mix of the real and the still-not-proven-to-be-real-but-can-be regarding the accessories that will come with the upcoming phablet. If you’re excited about different cases that will be available (hey, some actually are!) and you’re planning to get a Note 9 once it comes out, then read on.

If you’re looking for the more affordable ones, we’re supposedly getting Silicone Cover Cases whose sole purpose, of course, is to cover the back and sides of the device. You’ll get it in Lavender, Blue, Black, and White. We say it’s the most affordable since it’s the cheapest at $30 each. The Protective Stand Cover meanwhile will only have Black and Grey and is sturdier than the silicone ones. It comes with a flip-out stand so you can place it portrait style (45 degrees) or if you want to watch videos in landscape, make it stand at a 70-80 degree angle. It’s priced at around $45.

When it comes to the official ones from Samsung, we’ll be getting an LED View Cover Case in Black, Brown, Blue, and Lavender. The screen will show you the time, calls, messages, battery status, volume, etc, without having to open the case. It is priced at around $65. If you want it to look a little more “classy”, you can get the Leather View Cover Case which will only come in Brown and Red for now. It’s just basically a flip cover case and will cost around $60.

We’ll also get a Clear View Standing Case and it will come in Blue, Black, Brown, and Lavender. The front is semi-transparent so you will see basic notifications and even use it as a mirror if you need a reflective surface. It can also act as a stand if you’re watching videos. It will also be priced at around $60. We’ll see more accessories probably when the Note 9 is officially announced.

There have also been some leaks about the S Pen, most notably that for the first time, it will come in different colors. But actually, that’s not what we’re most interested in but rather what improvements will the stylus have this time around. Unfortunately, you can’t see that in leaked images so we’ll have to wait until August 9.