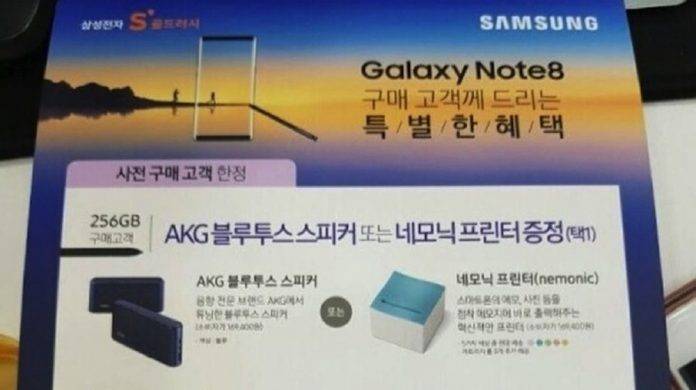 The Samsung Galaxy Note 8 is almost ready. We’re excited to see the new phablet tomorrow as the South Korean tech giant is set to launch the phone tomorrow, August 23. We know a lot of information about it including its expensive price, new camera and S-Pen features, Exynos and Snapdragon models, dual camera setup, and its force touch and 3D touch technology. We’ve probably shared with you all that needs to be shared.

A roadmap has also leaked, as well as, the promo materials in Australia. This time, a flier spotted in South Korea shows a 256GB model of the Samsung Galaxy Note 8. This doesn’t look like the expanded memory but the built-in storage. That is four times the basic 64GB model so expect the price to be more expensive.

The flier also shows a special promo in the country where consumers can get either a Nemonic printer or a new AKG Bluetooth speaker. For the 64GB model, it will be offered with a KRW 100,000 coupon that can be used for accessories like an original phone case, external 5100mAh battery, or a Gear VR.

Aside from this 256GB model, Samsung is also expected to release a 128GB variant. The 256GB model may only be available in China and South Korea by September.