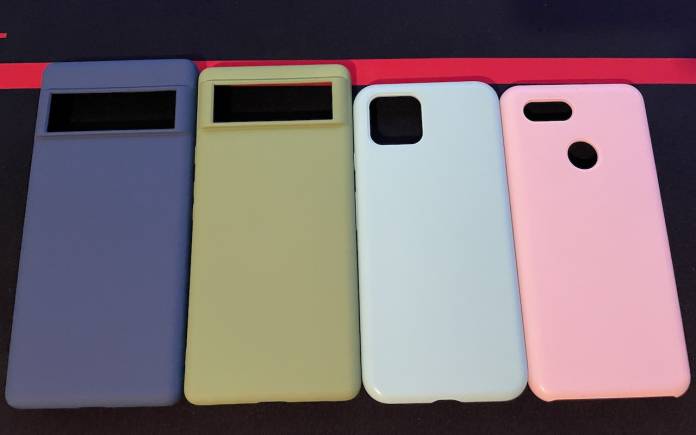 Google is excited to reveal the new Pixel 6 series. There will be two new phones: the regular Pixel 6 and the Pixel 6 Pro. The latter replaces the Pixel 6 XL. Some photos have surfaced on reddit, featuring the phone cases of both phones. They are placed beside Pixel 4 and Pixel 3 cases for illustration. The phones appear to be bigger than the previous models which tell use we can expect larger displays for an improved viewing experience and more.

The Pixel 6 phones are scheduled to launch next month. They may arrive earlier as Google usually surprises the consumers but the date doesn’t matter at this point. We just want to know how the upcoming duo will be better and different.

For one, we know they will be bigger as demonstrated by the photo above. The phone cases are for the Pixel 6 and Pixel 6 Pro. They are pictured beside cases for the Pixel 4 and Pixel 3.

Obviously, the new phones are bigger. The image confirms the rectangular camera module as previously shown off. That is different from last year’s rounded square design. Several details have been leaked already including the fact the Pixel 6 series will run on the Google Tensor chip.

The phone cases match the Google Pixel 6 devices that were published. The Pixel 6’s design of the front look shows off Material You’s colorful impression. The October launch is highly anticipated because by then we’ll know if either of the smartphone features an ultra-wideband (UWB) support, 33W fast-charging support, and a bigger and better camera sensor.

The Google Pixel 6 may not arrive with a charger. We can also look forward to a 5X ultra tele camera on the XL/Pro variant and the same GPU as the Huawei Mate X2 and Samsung Galaxy S21.