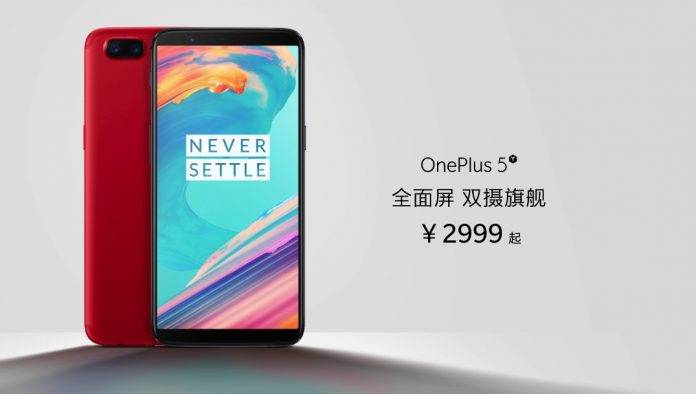 Everything about the OnePlus 5T is a blur really. We first learned about it last month when a device dropped by on AnTuTu with premium specs. It was leaked and then teased a number of times. It was confirmed and was soon announced in a special tech event complete with 18:9 Full HD display and enhanced cameras. The phone already survived a durability test and is said to be fast-charging with Dash Charge.

We were told the OnePlus 5 would be phased out and that a Star Wars edition may be launching. The Chinese OEM has finally and officially introduced the Red color version of the OnePlus 5T. It doesn’t seem to be the special Star Wars version but it’s still attractive and has potential to become a bestseller.

The Lava Red OnePlus 5T is actually a commemorative edition on the company’s fourth year in the business. OnePlus is celebrating with this release. Not many details have been shared but the phone’s price starts at ¥2,999 which is roughly $455 in the United States. We still have no information on sales performance but according to OnePlus, the phone has broken launch day sales within just six hours.

If you want the OnePlus 5T Lava Red edition, head on to OnePlus.cn. No information whether the smartphone will be sold in the US and other markets.