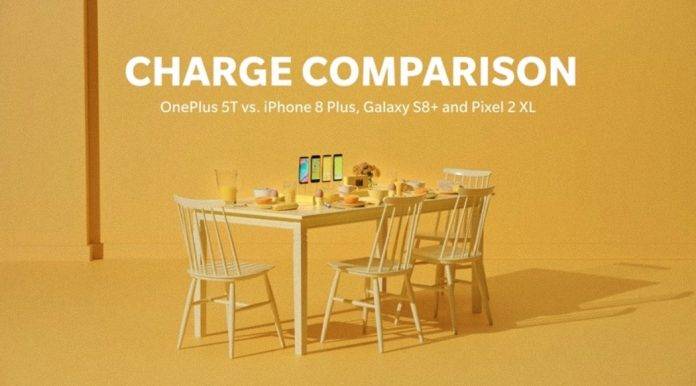 We love it when brands boast about how great or fast their devices are. They seem to be really proud of their products and that they are the very best. Such is the case with OnePlus showing off the newly unveiled OnePlus 5T. We’ve been featuring this new flagship from the Chinese OEM a lot lately because it’s marketed as a better version of the OnePlus 5.

With more updates and improvements on their way plus the fact that the company “never settles”, expect the 5T to improve more in time until the next-gen model is revealed in 2018.

OnePlus said there really is no comparison if we’re going to talk about charging speed. The OnePlus 5T features Dash Charge and as before, it’s still very efficient. In a screen-on charging test, the company demonstrates how speedy charging of the OnePlus 5T can be compared to other flagships.

When placed beside the new OnePlus 5T, other phones will look very slow.

Watch the video published by OnePlus below:

From 2%, the OnePlus 5T reached more than half of its battery potential in about 30 minutes. Half-batt in half an hour? You bet. And maybe fully-charged in another 30 minutes or so. Well, there’s the fact that the largest battery is from the OnePlus 5T. The Pixel 2 XL and the Samsung Galaxy S8 have almost equal battery. The 5T’s charger is bigger so we can say it’s even more powerful.