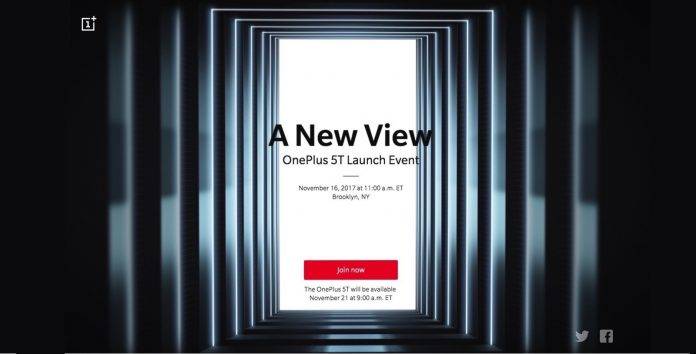 It’s happening. The new OnePlus 5T will be unveiled sooner than soon. The Chinese OEM has been working on a new variant of the OnePlus 5 that will roll out before 2017 ends. News has started to spread and the grand reveal will be in New York City. We’ve seen teasers and hints that the phone will still have a headphone jack, better cameras, and probably a Samsung AMOLED display. The device already dropped by AnTuTu with premium specs and on November 16, we’ll finally have confirmation about most of the details we’ve been hearing.

The OnePlus 5T launch event is entitled “A New View”. We’re now more curious than ever since the OnePlus team has been working hard on the new product with all the information and contribution from earlier OnePlus phone users. Previous feedback, suggestions, and bug reports were all taken into consideration in building the upcoming OnePlus 5.

OnePlus will be making the announcement on November 16, 11 AM (EST/4PM GMT), in Brooklyn, New York. The keynote event will also be streamed live via the company’s official website that can be watched by everyone from all over the globe. The live event in New York will be ticketed. Get in for $40.

The phone will be available beginning November 21 in Europe and North America. China will follow on December 1. Meanwhile, in India, the phone will also be ready via a flash sale also on November 21 before the official market release on the 28th.