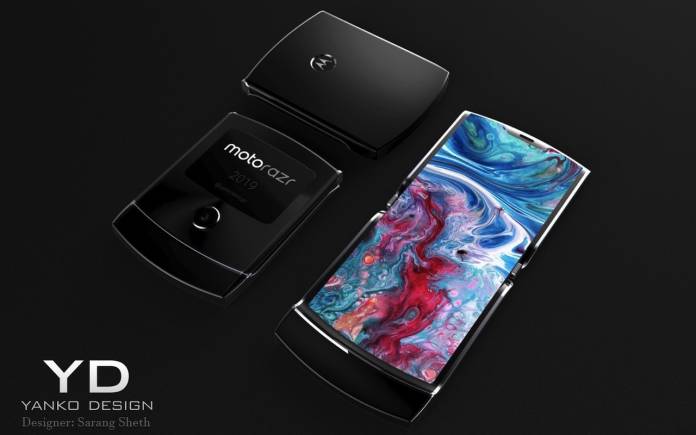 Motorola, now a Lenovo company, wants to join the foldable phone craze. After the Royole Flexpai, Samsung Galaxy Fold, and the Huawei Mate X, we may soon see the new generation of Moto RAZR. Before the end of the year, a Motorola foldable phone may be released. No information on the launch date but the brand is already working on the new mobile device. Once it’s out, we may be taken back to the time when Moto RAZR flip phones were so popular.

Earlier in February, the Motorola foldable phone was confirmed and said it could be the new MOTO RAZR. A list of specs was sighted. The Moto RAZR foldable phone is also said to be more compact and more affordable.

A number of concepts and renders of the Moto foldable device have surfaced. Lenovo even showed off a fan video (sans any permission). Images were leaked on Weibo. Motorola’s first foldable phone was also seen on Bluetooth site a few months ago.

The Motorola RAZR foldable phone patent was officially granted at the beginning of the year after some rumors one may be in the works. Motorola venturing into foldables may help the brand in getting back its position in the mobile industry although we think the public will buy more because of novelty more than the specs and features. If that’s the case, it won’t be a problem at all because if still is revenue.

The Motorola RAZR foldable phone will be reminiscent of the MOTO RAZR clamshell phone. It’s being made in secret as with any other smartphones. The Razr brand was a popular series in the early 2000’s. The last one we featured was back in 2013 when Motorola unveiled the Moto RAZR D1 and Moto RAZR D3 smartphones.

This 2019, we may see another Razr phone that folds inwards and vertically like the old Razr. Motorola’s release is said to have been delayed. There was a promise of a Summer launch but still nothing yet. It’s understandable because after the failed launch of the Samsung Galaxy Fold, other big OEMs like Huawei became more careful by postponing the Mate X’s launch to make sure it’s ready in every aspect.

The Galaxy Fold has been relaunched. So far, it’s “safe” so other brands may follow. The Huawei Mate X is expected to roll out before end of the year as well. A Xiaomi foldable phone prototype was seen already. TCL is also showing off concept foldable phones.

Motorola may be struggling to produce and get the foldable phone out but we know the mobile brand can do it. After all, it already has the experience and Lenovo has its back. Let’s wait and see for further progress.