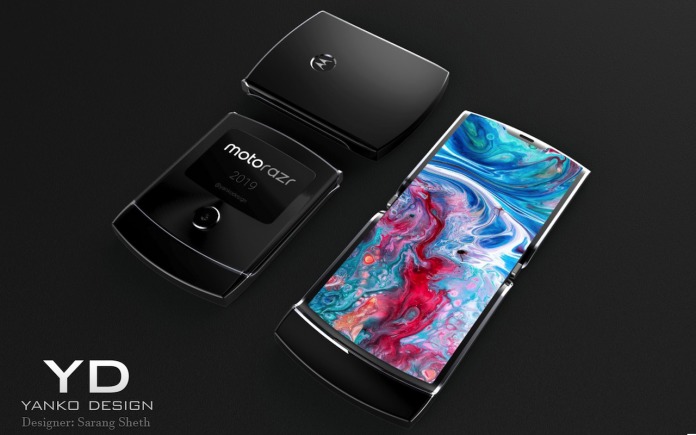 Motorola foldable phone has already been confirmed earlier this year. It could be the new MOTO RAZR with some of the specs listed. We’ve already seen the patent granted and several image renders. There was even the controversial fan video that Lenovo shared without permission. Back in April, the first foldable phone from Motorola was sighted on a Bluetooth site which indicated an upcoming release. The announcement was thought to be in May but nothing. Those photos that leaked on Weibo were somewhat believable. Now we’ve got information when the device will roll out.

The Motorola foldable phone aka the new Moto RAZR may be out in Europe in December or early January. The price is said to be €1500 which is about $1,664. The Motorola RAZR’s image above was an early render by Yanko Design. It’s not the official product photo so don’t get too excited yet. But yes, we’re imagining a similar design will be implemented.

LetsGoDigital has just shared some important information. It’s been confirmed the folding smartphone will come with a large flexible display. A smaller screen will be available on the front when the device is folded or closed. The small display shows if there are incoming calls, alerts, or notifications.

So far, we also know the MOTO Razr will come with a smaller battery. The screen won’t be as big as the Mate X and Galaxy Fold because the RAZR foldable phone is meant to be more compact. It will be announced in the US first and then Europe with a December to January market release.