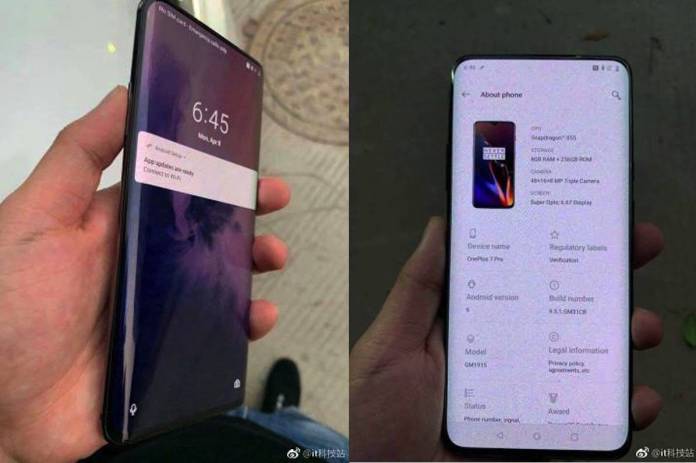 After learning that many people prefer the OnePlus 6T over a premium Samsung Galaxy phones, here’s another bit of interesting news. The OnePlus 7 Pro is said to be ready as a couple of images appeared on Weibo. The leaked images show a mysterious phone that looks like the OnePlus 6T. This one though comes with what seems to be a curved edge display we’re assuming gives that bezel-less look and feel. No other information has been shared but the caption simply suggests it is a OnePlus 7 phone.

There is even no detail that it is the Pro variant so we’re wondering why some people are saying this is the OnePlus 7 Pro. It appears to be bigger though than the usual OnePlus flagship size.

As early as November last year, we’ve been hearing about this OnePlus 7. We initially thought it wouldn’t implement 5G tech but the Snapdragon 855 would offer 5G support. Also, OnePlus 5G may cost more but not that expensive.

Earlier, a OnePlus 7 image leaked and a new render then appeared. More OnePlus 7 live images appeared on Twitter with no notch or camera-hole or wireless charging. A 360-degree video surfaced online already. The Pro variant should have improved specs other than the ones mentioned.

OnePlus 7 specs and pricing were listed on a retailer’s website .The OnePlus 5G Apps program already begun so expect it to happen sooner than soon.

When it comes to OnePlus 7 Pro, the device may boast a large 6.67-inch Super Optic screen, in-display fingerprint sensors, 8GB of RAM, and 256GB of storage.