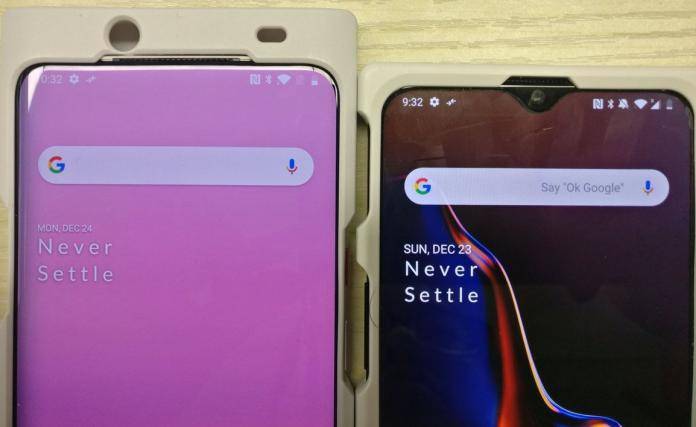 Details about the Samsung Galaxy S10 are aplenty. They may be just rumors and speculations but we believe most of them. We’ll have confirmation in about a month and after that, we’ll move on to other OEMs like Huawei or OnePlus. The LG G8 may also be announced at the Mobile World Congress so let’s just focus on OnePlus. We’re anticipating for the OnePlus 7 which we’ve featured twice already. We said the phone may by 5G capable next since the company wasn’t able to do so last year.

The OnePlus 5G model will be expensive for obvious reasons. It will feature new technologies including wireless charging since OPPO, OnePlus’ sister company, is now part of the Wireless Power Consortium.

A new image surfaced on Twitter that shows a new OnePlus. The one on the right is either a OnePlus 6 or OnePlus 6T. We can tell because of the waterdrop notch.

As for the device on the left, it still is a OnePlus phone because of the ‘Never Settle’ on the screen. The phone doesn’t show any selfie camera. There’s not even a camera cutout or camera hole so there is a possibility OnePlus will implement a sliding camera design like the OPPO Find X. That or a pop-up camera (elevating selfie cam) of the Vivo NEX S.

Could this be the next-gen OnePlus 7? Let’s wait and see.

And here is a new render based on the leaked photo: