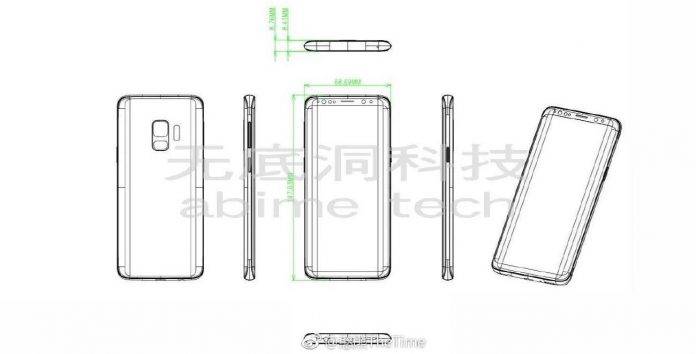 The year 2017 is about to end and this means a new year for new gadgets and technologies to be introduced. We’ve been anticipating Samsung’s next premium flagship phone and we’re expecting it to be teased at the CES before its official launch sometime in February or March. The Galaxy is rumored to have improved iris recognition, probably a 180-degree curved screen, large display, and bezel-less design.

The Galaxy S9 is also said to ship with a pair of Bluetooth earphones which could mean the audio jack may be absent. We’ve seen some CAD renders showing vertical dual rear cameras and we already said there may not be an in-display fingerprint sensor. We know the phone will have two variants, S9 and S9+, and that they might be modular and will be powered by a Snapdragon 845 chipset. The display size and shape may be the same as the Galaxy S8 and S8+.

A new set of images have come up on Weibo, showing how that Galaxy S9 could look like. These are schematics that are rather unclear. What’s interesting here is the fingerprint scanner placed at the rear but instead of being found beside the camera, it’s now located below.

Looking at the image, the dimensions of the Galaxy S9 could be at 147.63 x 58.63 x 8.41mm. That’s slightly shorter than the Galaxy S8 but we’re assuming the bezels will still be smaller and the display larger. We’re taking everything with a grain of salt until the official announcement so we’ll see.